A wire bridge that connected villages

Sometimes a wire bridge can bridge villages… those villages which are cut off due to natural calamity, those villages where people are alive and ‘safe’ but do not know how long they’ll continue to be so. There is shortage of food supplies, medicines and such likes. The roads are washed away and there is no way they can commute to or communicate with the rest of the world.
Yes, we are talking of Uttarakhand which took the brunt of the recent Himalayan Tsunami. 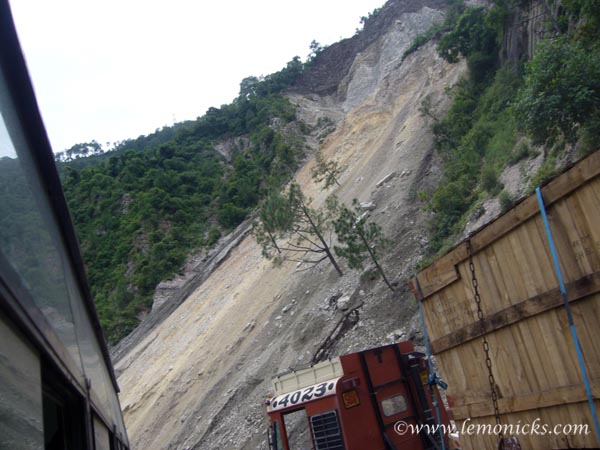 Landslide: A vehicle was caught in debris & overturned.

Forget boosting tourism or rebuilding temples, these locals are struggling to have even a single meal! They have nothing to survive on. They have heart rending stories of losing their family members but their zeal to live & help others will surely move you.

When I see any visuals (which I try not to), I feel so helpless and also shameless sitting thousands of miles away from it.

But we have some real heroes who defied all obstructions that came in their way to reach out to the locals. I salute them for their commendable job. Here is what a team from Nature Connect (a group that takes schoolkids on treks to Himalayas) did.

Before I leave you with this pictorial story which was tweeted by Alok Bhatt (@alok_bhatt) from the scene of action, I’ll appreciate if you comment on this post. This is going to be shown to the team and many other heroes and will definitely boost their morals.
I think we can do at least this !!

In Alok Bhatt’s words “Idea behind tweeting pics and what we did was to encourage all of us in doing things that r beyond twitter discussions…thr is a lot to do!”

Here we go! Captions are below the photos.

Yesterday, Team Nature Connect worked with @shaileshkpandey bhai to realise #sakaar dream of connecting 11 villages to Phata via a wire bridge.
It all started with getting down at a spot from where we had to walk down to the river bed, 1200 feet down.

Before starting the descent, we as in Sumit-Manoj-Amit-Ankit-Rajeev-Shivram & Pant decided to stock enuff water.

Water and Equipment- both were equally important!

As soon as v reached river bed, search for support began and important was to measure the width of bridge

Shivram and Amit spoke to @shaileshkpandey and a tree was identified…equipment recheck!

Amit-true to his image-decided to lead frm front & walked on those electric poles over Mandakini, flowing dangerously

After crossing that pole bridge, they had to walk up that mountain…..

Then, ropes were sent to other side….

After one end of the wire was brought down to river bed, it was tied to our ropes

After preparing rope base,Amit & Shivram decided to come bk as v had skipped breakfast, Maggi packets in our sacks helped

Then started the work of tying the wire to the tree

Tying wire around the tree are Shivram /Ankit and Sumit

Little sprain on wrist but who cares!

Shivram, being a NIM trained instructor was to decide on the knots

After finishing work on right side, entire team had to cross bridge again and climb that rock to other side

Before I crossed it, took this shot.Do notice the current;though bridge wasnt as bad as it was when Amit cross earlier

Walking up that rock too was a challenge….there were no holds on that rock…besides it was slippery

More n more villagers joined in and finally we managed to pull the entire wire to this side..200 mtrs long-300 kgs If you notice, there are kids pulling the rope as well.

As we were working on this side, a 14 yr old slipped & was saved after herculean 5 min rescue by villagers.

Wire (in black) suspended over Mandakini….tightened as much as possible with human hands n yellow wire for belay

In red tee is Vasudev-lost his lone son to Uttarakhand tragedy-how many can gather courage to help aft goin thru tht!

How many can smile after achieving something d way Narain Singh….he lost his young son to the Utarakhand tragedy!

U can see two of those in action here

And here too….Narain Singh went right up to the river to pull that wire

This pic of relief being pulled across Mandakini

This pic of relief being pulled across Mandakini

This woman from Village Dadoli was amongst many who served food 2 tourists.Told me-we emptied our stock n none bothered abt us

Dont have more shots of ration being pulled towards village side as by then cell battery conked off….and we all were dead tired…

But then we had to climb down that rock to cross towards other side & climb up to the road….by the time we returned to room, we were dead!

But entire team had a sense of satisfaction and achievement…..playing our little role in realising the dream of #Sakaar & @shaileshkpandey

Note:- All photos except the first one are owned by Alok Bhatt (@alok_bhatt).

26 thoughts on “A wire bridge that connected villages”

As you all know I…