Places to Visit in Bikaner

Top 15 Things to do or Places to Visit in Bikaner 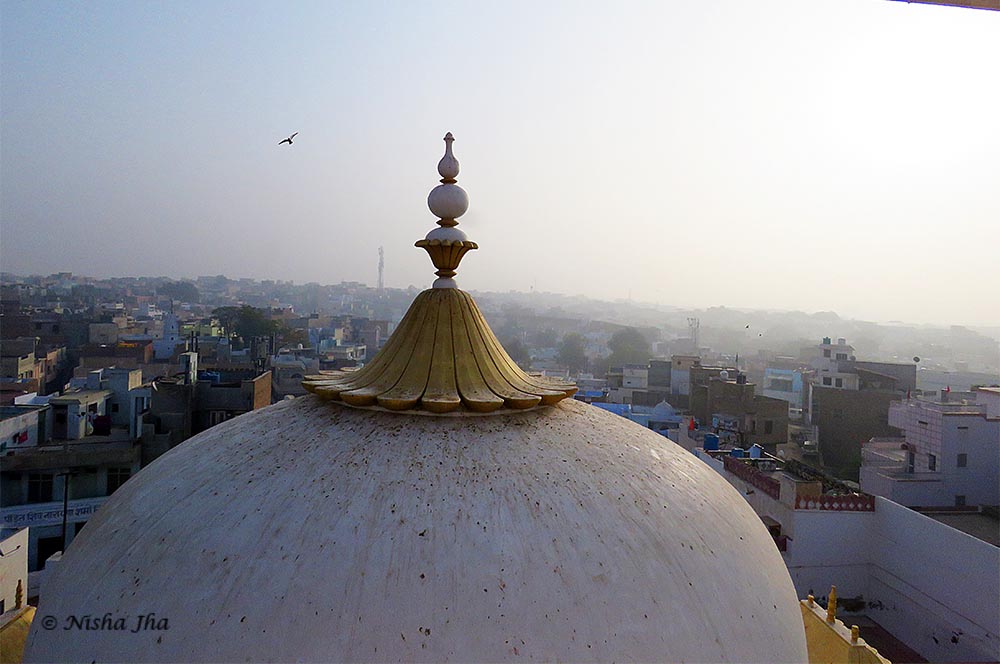 Bikaner trip was our first trip of the year 2017. When we landed there, we knew we had started the year on an awesome note. Unlike other touristy cities of Rajasthan such as Jaipur and Udaipur, Bikaner is not so crowded. So, we can explore this historic city at our own pace.
We loved Bikaner in many ways. Here we suggest these 15 places to visit in Bikaner. 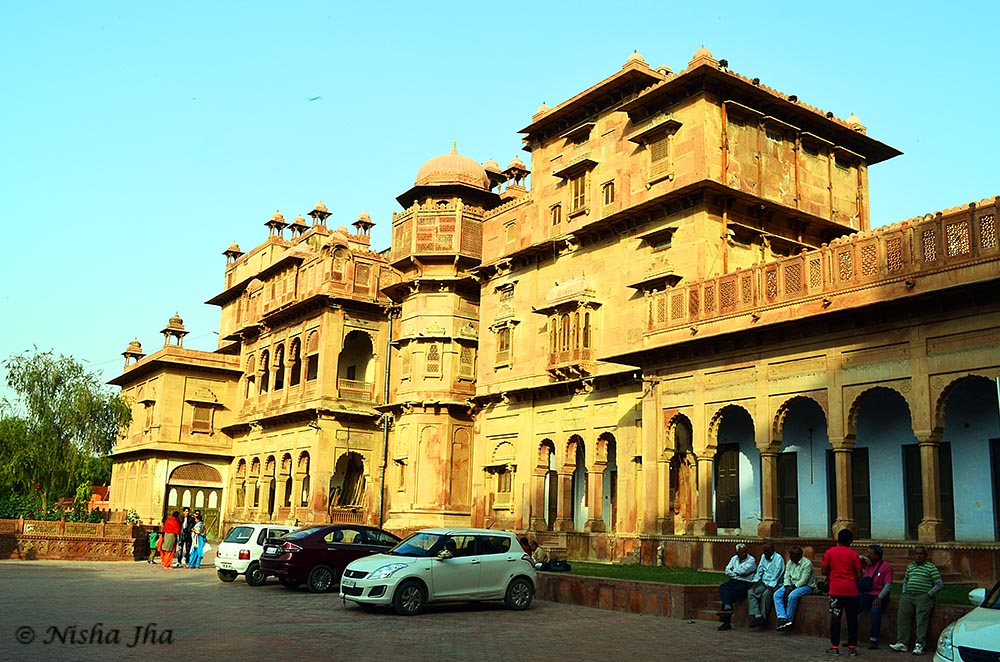 I was quite surprised when I first saw this fort. You know why? It is one of those few major forts in Rajasthan which is not built on a hilltop! Junagarh Fort was originally called Chintamani and was renamed Junagarh or “Old Fort” in the early 20th century when the ruling family moved to Lalgarh Palace outside the fort limits. Till then the subsequent leaders kept adding palaces, temples and pavilions to it. Some of them are Phool mahal, Anup mahal, Badal mahal. My personal favourite is Badal mahal. A major feature of the fort is the stone carving done in red and gold coloured sandstones. The interiors of the palaces are decorated and painted in traditional Rajasthani style. The fort is well maintained and is a must visit. 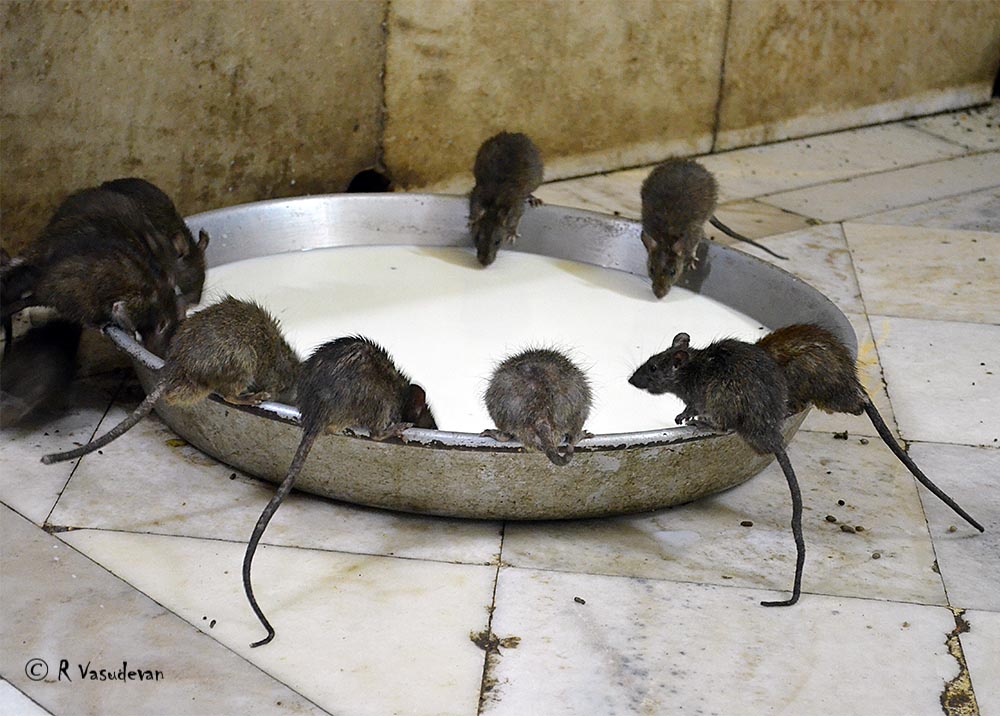 I knew about this strange, one of its kind temple since years. This time I could visit also. Karni Mata temple is famous for rats that live, and are revered here. These holy rats are called kabbas. The temple attracts visitors from across the globe for blessings, as well as to satisfy their curiosity. This Temple is in a small town of Deshnok, at a distance of 30 kms south of Bikaner in Rajasthan. The legend about the temple is extended but in short, it is said that when someone dies in the Charan community, he is reborn as a rat and when a rat dies, a human baby is born in a Charan family. Be careful while walking here. If a rat dies under your foot, you must replace it with one made of solid silver! 😀 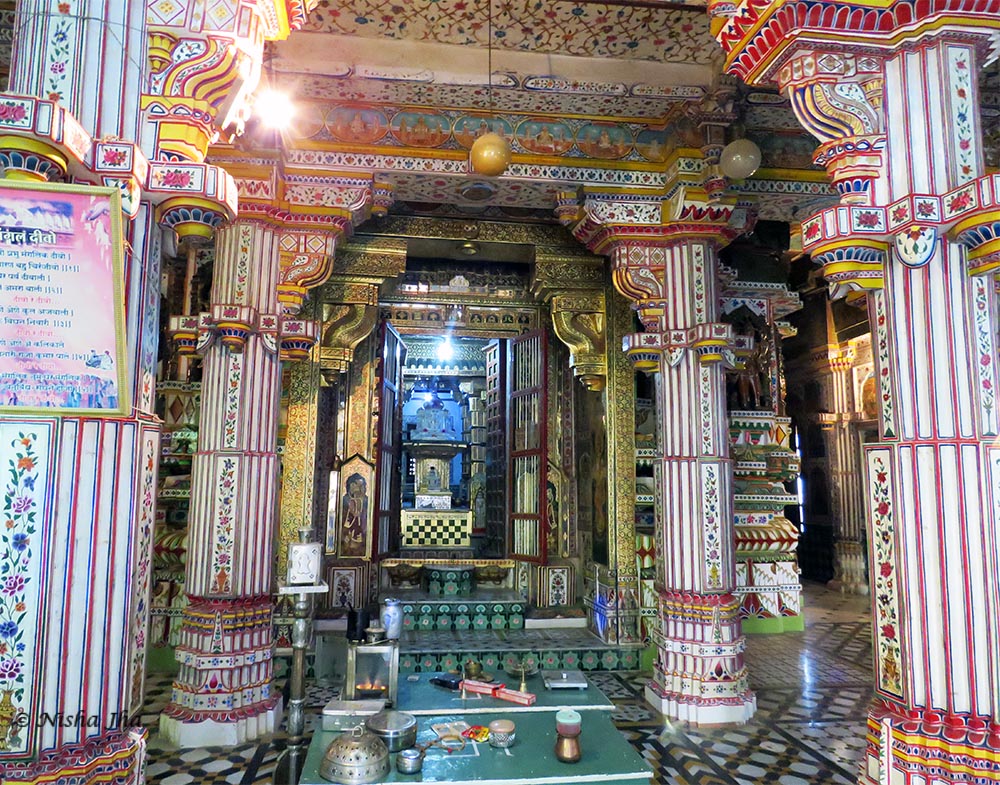 This unusually ornate two-storied Jain temple, built by a merchant, is better known as Bhandreshwar (Bhandasar) Temple. It is said that 40,000 KGs of ghee was used, instead of water, in its foundation when during a drought he was asked not to use water. The locals insist that ghee seeps through the walls during summer and the tiled floor shines. What attracted me more was the stunning temple interior with vibrant paintings adorned with gold leaf patterns and the fact that they are very well maintained. Detailed post will come later.

Grand Havelis. There are so many of them!

To be honest, I did not expect grand havelis in Bikaner. For me they existed in other towns of Rajasthan. Thanks to Narendra Bhawan (our hosts), we could see this side of Bikaner. It was difficult for me to choose the most fascinating one. The havelis belong to different merchant families who flourished and made Bikaner their home.
Of course, most of these havelis are vacant now because the owners chose to live in other parts of the world. I would love to go back and see some from inside. I could picture how children would have played inside, how women would have sang some songs while doing household chores. We absolutely recommend this Haveli tour. 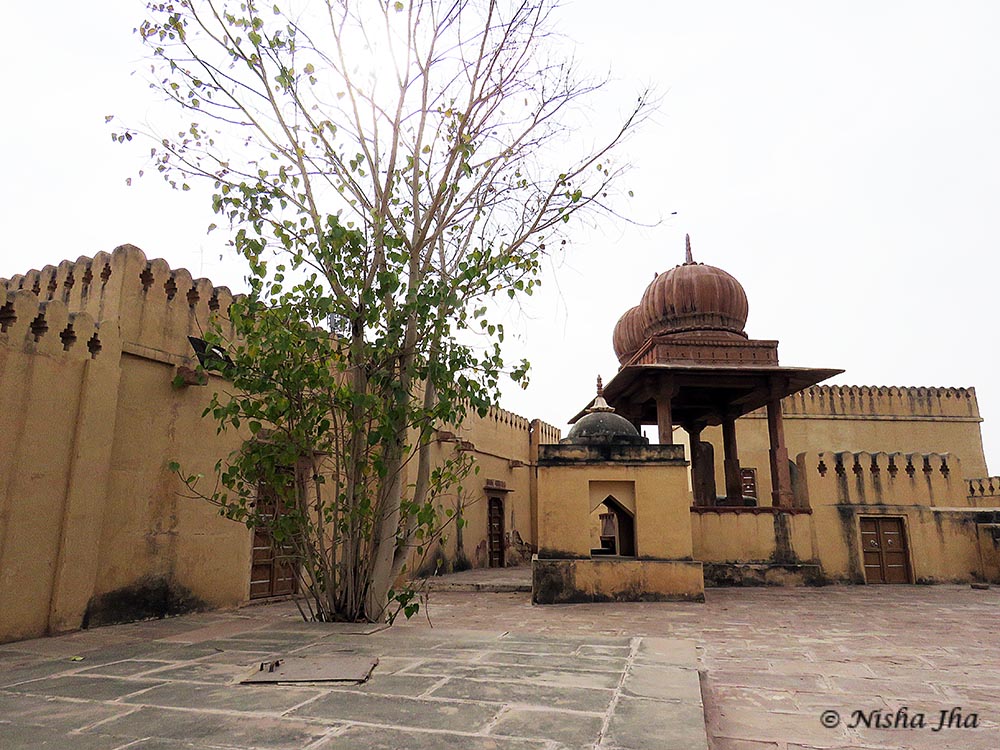 The Royal exploration starts from the very beginning. The first stop is Bika ji ki Tekri. Rao Bikaji, son of Rao Jodha Singh, ruler of Jodhpur, was the founder of Bikaner. He left his father’s zone in 1465 and carved out his own territory, Bikaner, in the wild regions of the then called Jangladesh. Bikaji ki Tekri is his first humble attempt for a fort in the city. Now only this small fort and a part of the wall that surrounded the city remain. It is also not on the list of most tourists. 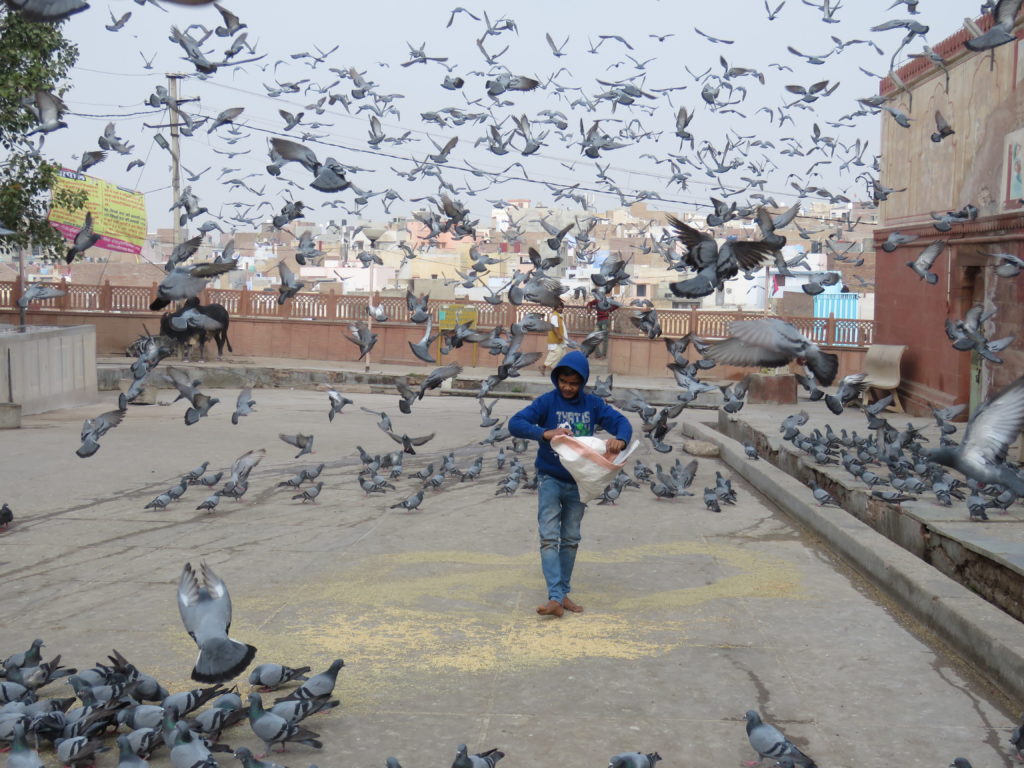 Laxminath Temple is one of the oldest temples in Bikaner. It is said that Rao Bika, the founder of Bikaner himself offered prayers here. The most exquisite artwork inside the temple besides the shrines is the doorway which is embellished in silver work. Photography is not allowed inside the premises. 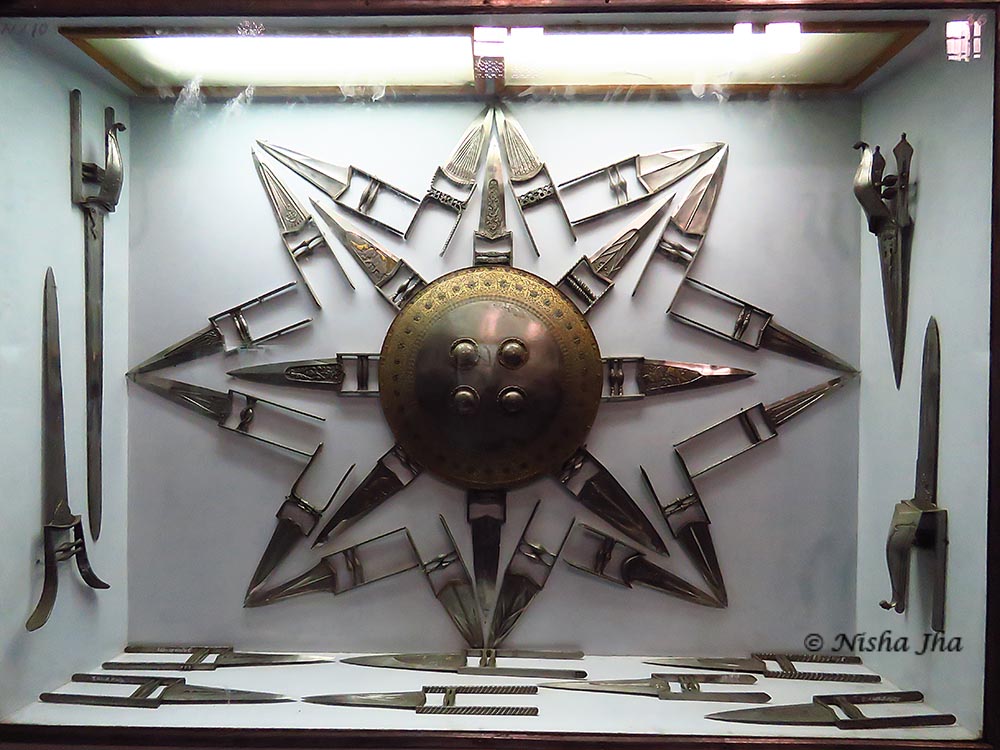 This museum was established by Siddhi Kumari daughter of Late Maharaja Narendra Singhji of Bikaner in 2000, with a vision to preserve and showcase Bikaner’s rich cultural diversity. Siddhi Kumari’s endeavor is in line with the Bikaner Royal Family’s rich and glorious tradition of establishing institutions for public benefits.
This museum is inside Junagarh Fort and has separate ticket of INR 50 for Indians. This includes camera charges. 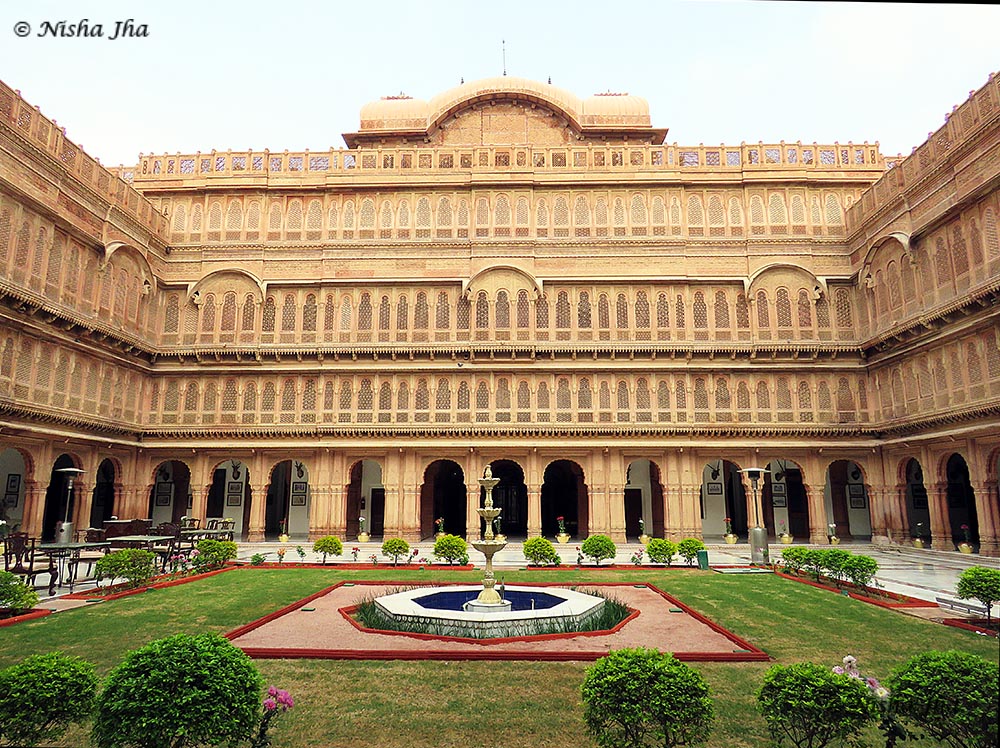 Laxmi Niwas Palace, in my opinion, is a photographer’s delight. Every room in this 5 star hotel has hand-painted walls and is adequately furnished. This heritage hotel provides amenities like dressing tables, brass beds, bathtubs and shaving mirrors, each exuding an old-charm. Some of the movies are also shot here.

The Royal Cenotaphs or the Chhatris, last resting place for members of the Royal family

A little outside the city at Devikund sagar, the Royal Cenotaphs or the Chhatris were built for the royal family of Bikaner. Starting from the fourth king of Bikaner till the last king Narendra Singh ji … they all took their last journey to this place. Each one is beautiful and you can also see the cenotaphs have lovely stone carvings depicting the Royal art of stone work of Rajasthan. 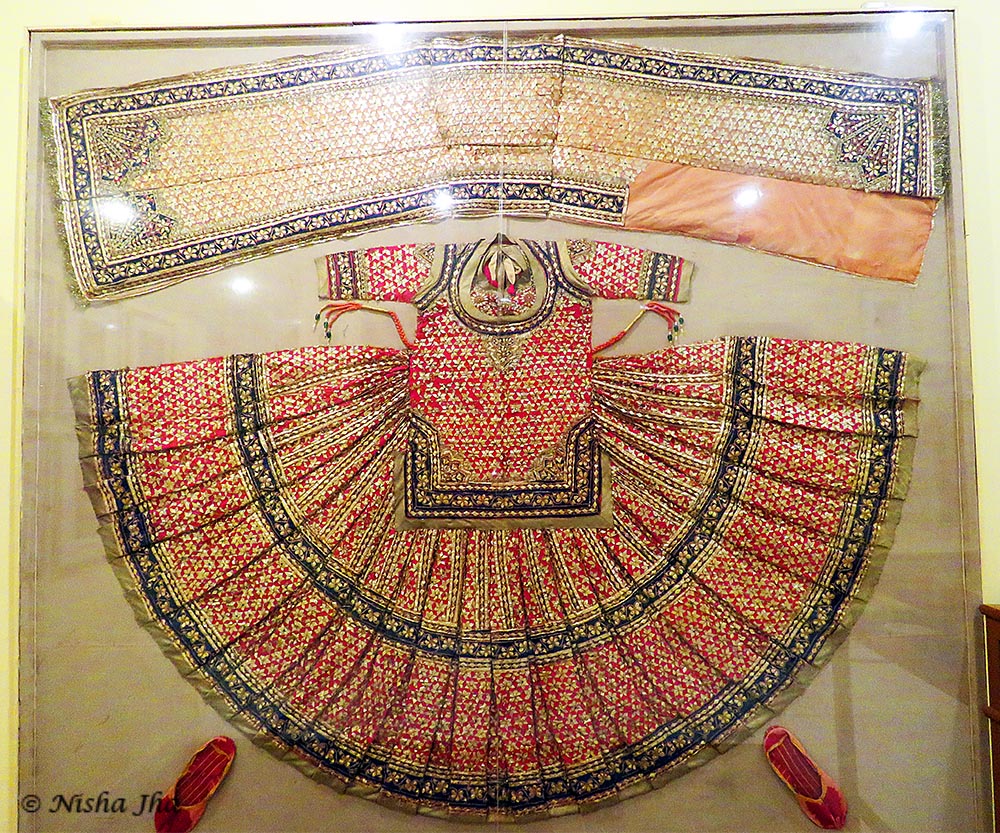 A Royal dress on display in Lalgarh Museum

Lalgarh Museum is in the Lalgarh complex. This is a private property in use by present Maharaja of Bikaner. A part of the palace is now a heritage hotel. Inside the museum one railway coach (meter gauge) used by Maharaja and their family members is kept at the entrance. Inside the museum there are displays of photos of events, paintings, garments used by Maharajas, gifts and several art and craft items. I loved the silk garments very much. 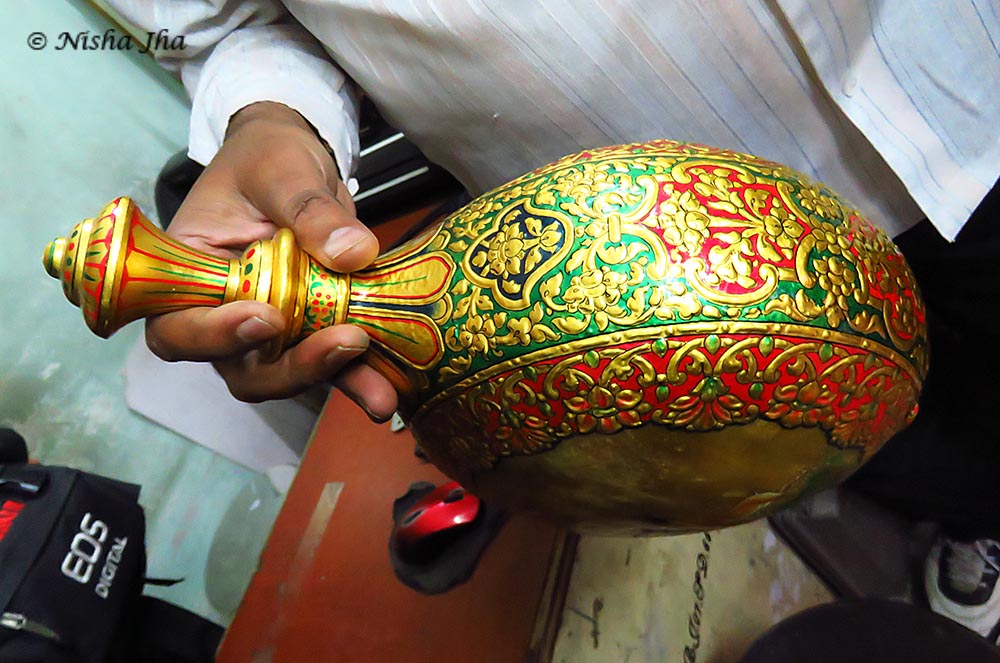 This is one art that surprised me a lot! I had seen a few paintings in Narendra Bhawan and when we visited Mr Ajmal Hussain Usta in his Workshop, I could join the dots. Usta art is a generic term used for the media of Naqqashi and Manoti art practiced by Usta artisans from the Bikaner. It is said to have originated in Persia and later came to India.
Usta art is the art of embossing with gold and meenakari (an art famous for gold jewelry in Rajasthan). I ahve written a detailed post on Usta Art Bikaner. We suggest, even if you do not wish to buy anything, do drop in to see his work.

Paintings and Rajasthan go hand in hand. Since childhood I always used to admire handmade paper greeting cards with miniature paintings on them. Little did I know, one day I would have a privilege to meet Mahaveer Swami, an award winning miniature painting artist, at his workshop. About him, the less said the better. Humble to the core, he is famous world over. As I write this, he is in Hong Kong for an exhibition. Do visit his workshop to learn more about it. 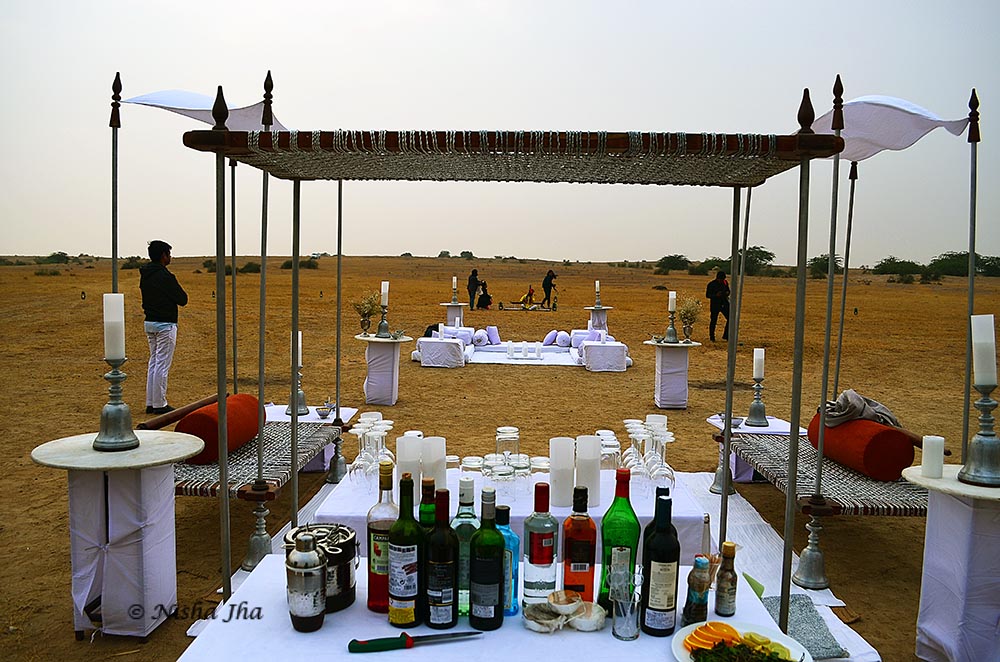 If you want to watch the sun go down in the desert with a glass of wine, and lilting folk music to arouse your rustic music sense, this is an experience made just for you. Our hosts took us in the middle of desert and pampered us with all the good things in the world. 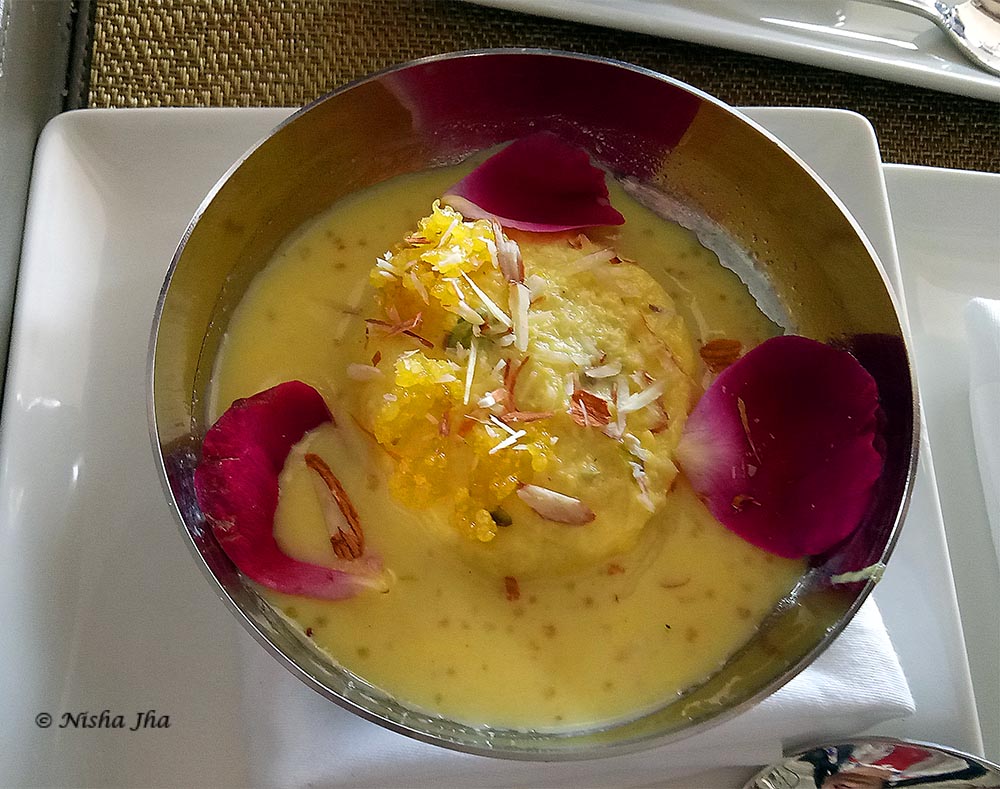 This is one thing that we always try our hands …. errr mouths on! The local delicacies. The epic Kachauris, Gulkand milkshake (Vardhman is the best place), Ghewar, Rasgullas, and the ever famous Bikaneri bhujiya! You cannot complete your trip without feasting on these.

The city has all the colors of shopping opportunities. Bikaner is a place where the country’s best Kundan Jewelry is made. Bada bazar, Kote market, MG Road are a few markets where you can do your shopping. Camel leather shoes & wallets, Nokha Razai, Ghewar, Bikaneri Bhujia, miniature paintings are a few things you may want to take home.

Note: Narendra Bhawan curates two beautiful trails known as Merchant trail and the Royal trail. Merchant trail consists of all the grand Havelis which were built by various merchant families. The Royal trail takes us first to Bika ji ki Tekri where it all started. Then to all those places where the royal family used to pray, live and finally where the members were put to rest. I’ll write a dedicated post on these two trails. We highly recommend taking these trails with them.

How to reach Bikaner

Bikaner can be thought of a weekend getaway from Delhi and other parts of Rajasthan.
By air – There are two airports nearby, Jodhpur and Jaipur, and a cab ride will take 4-6 hours to reach Bikaner.

By train – Bikaner is well connected to major cities like Delhi, Jaipur, Allahabad by train.

By road – The city is well connected by buses to all major cities of Rajasthan and Delhi.

Rajasthan is at its best during winters. Plan your visit between October and March. December and January are the best months in my opinion. 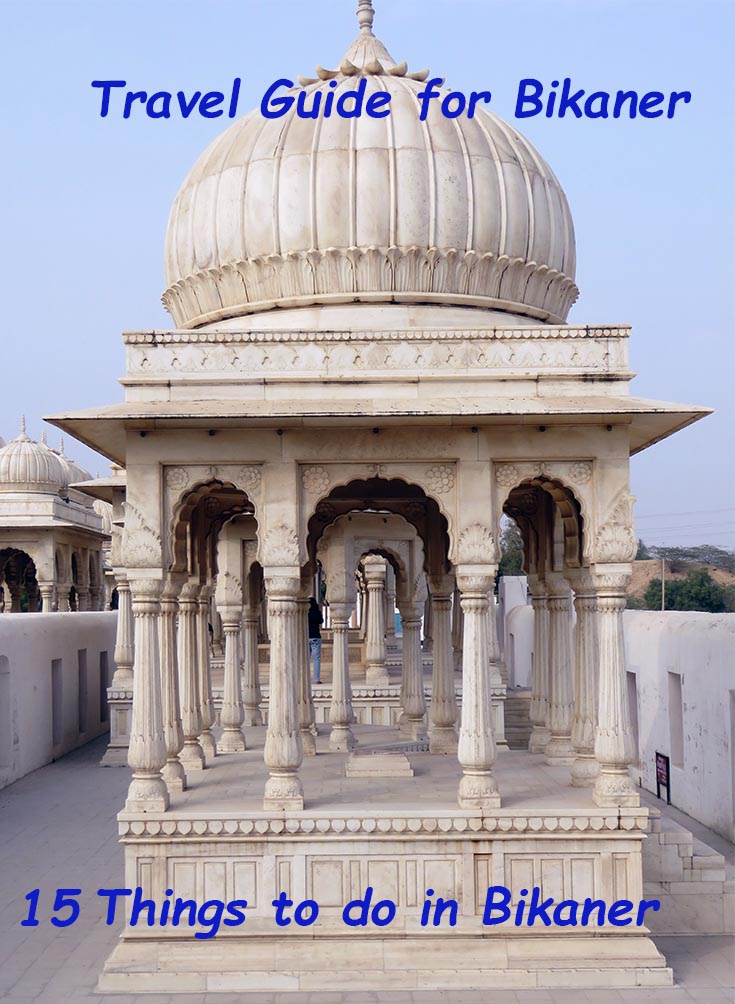 PS: We were invited to Bikaner as travel bloggers by Narendra Bhawan, Bikaner.

81 thoughts on “Places to Visit in Bikaner” 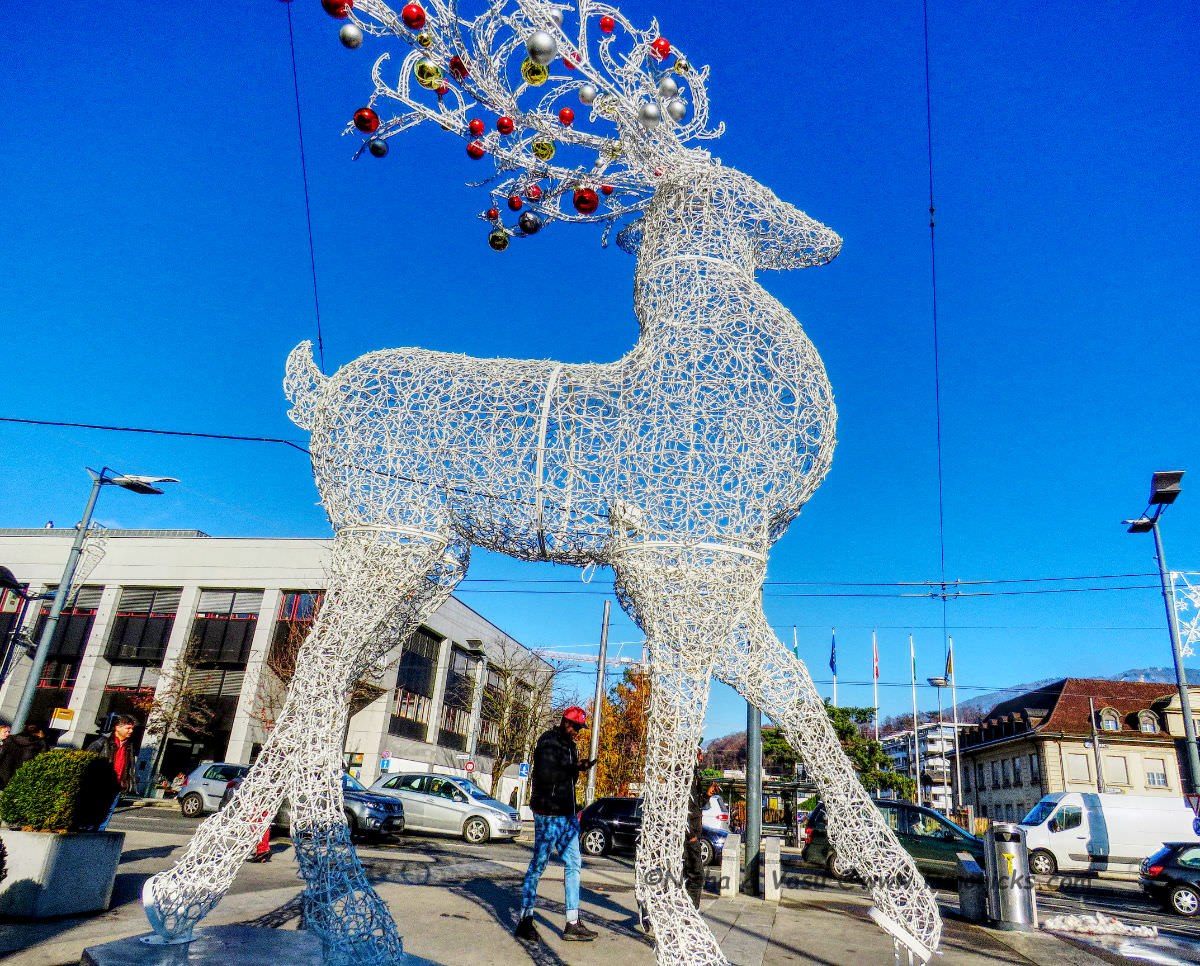 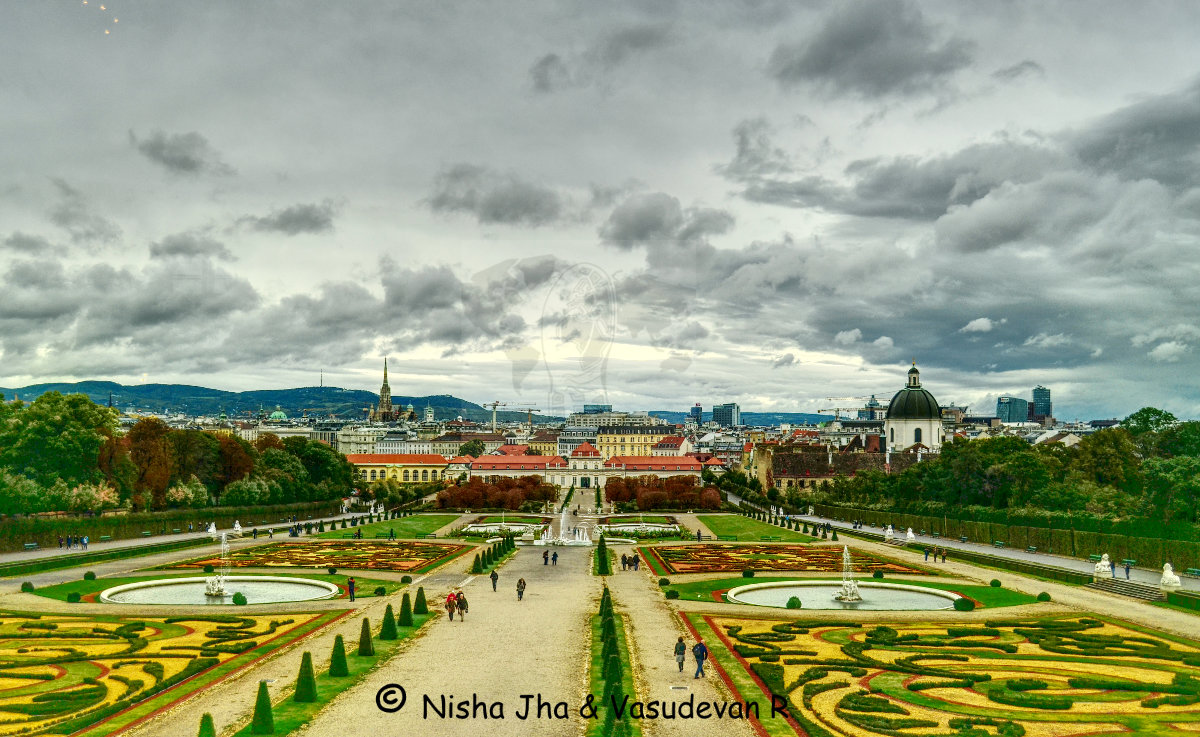 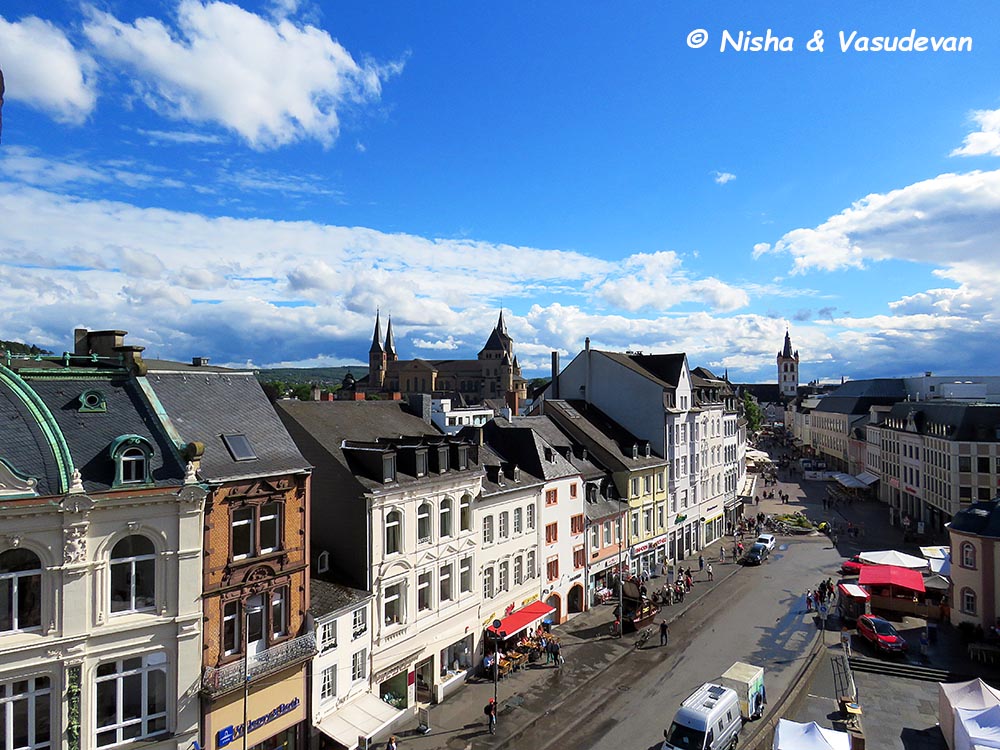