Peaks and Valleys of Delhi

Peaks and Valleys of Delhi
Do you have just love and nothing but love for a city in India? Not me.
I think I have a love hate relationship with every city in India. I like certain things about a city and at the same time I wish I could have reasons not to dislike it.
Delhi is first among them.
Being the capital city it has a few privileges that are visible at first sight but the city also has a down side to it. While you love the variety and richness of its food, you hate the arrogant & careless attitude of people.

Generally there is a scant regard for law and every one know some one in the higher echelons of the society or the corridors of power! Often the smallest of an argument is decided on the basis of who has the more powerful acquaintance. 🙂
But there is also a particular charm about the people. From a top position holder in a company to the cleaner of a bus, most commonly spoken language is Hindi. Their Hindi is very different from what is spoken in Mumbai or any other metro.

Let’s talk about the transport.

As much you are in awe of the wide, smooth, well marked roads and countless flyovers in the city, as you are scared of speeding DTC buses on the road that look like a killer unleashed to do its job.
I have hardly seen a bus driver driving the vehicle with patience. Some of them find pleasure in speeding the bus just when they see a woman is about to board it.

Being capital of India, flights to Delhi are plenty. Now it has a latest terminal T3 as well but come out of the airport, you are surrounded by a horde of touts, taximen and after a few yards, some autowallas as well. These people will try to persuade (read misguide) you not to go for a prepaid cab. 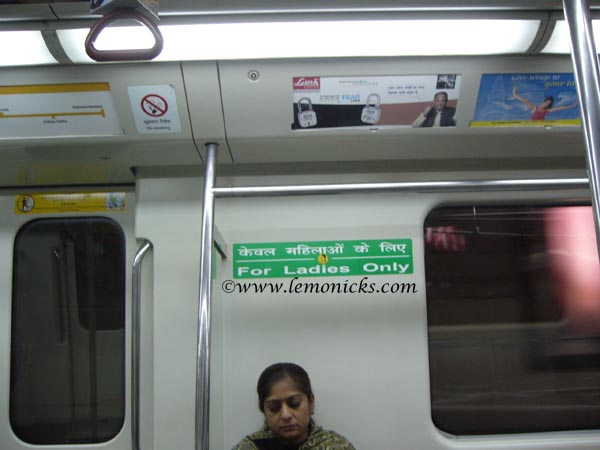 Ladies only seats in local metro in Delhi.

It took almost 20 years before India commissioned its second metro in Delhi (First one was in Kolkata). Amidst much fan fare a small section was commissioned. By the time I had a chance to experience it, there were 3 lines in operation. My experience in Delhi has been good for most parts. I remember once I had work in 4 corners of the city and I could complete it in one day itself. I used the extra day in hand to visit another city by taking overnight bus. 🙂
On the negative, I once saw a woman encouraging her small child to relieve himself near the closed door. When some one pointed it out to the woman, many of the passengers supported her. I guess in the end it is the people who make the city lovable or not.

I shall be writing about other cities as well.

7 thoughts on “Peaks and Valleys of Delhi”