Thrilling finish to a memorable trip

Contd from here ….. A trip to Sikkim

Plan for next day was local sight seeing which was to start at around 10 since we were quite late to hit the bed on first night.
I took advantage of this extra time in the morning and ventured out to a nearby village with my camera.

Whether it was a school or a house, the morning chores took importance over anything else.
I met a young girl in her school uniform rushing towards her house after borrowing two eggs from neighbours. I saw a young toddler refusing to put on his crocs. I met a boy running to his hostel with homemade hot breakfast in his hand. Apparently his house was next street and he could somehow sneak out of boys hostel. 🙂 I met many other such people.
In short, I saw life. I found people untainted, polite and somewhat reserved. 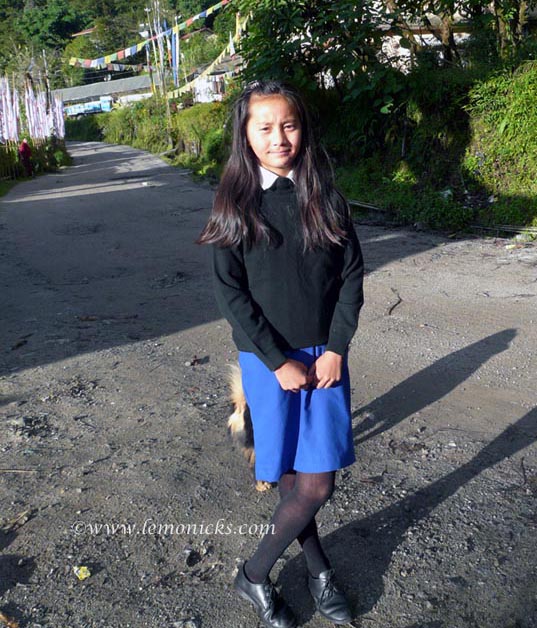 Hiding eggs in both her hands and her dog hiding behind her.

Spent some time with those locals and came back.
– – –
Our first stop of the day was at Himalayan zoological park at Bulbulay where the professional photographers in our group had some good clicking opportunities.
I could also enhance my knowledge of animals beyond dog, cat, cow, tiger, horse etc. You know what I mean. 🙂

Some uncommon animals such as Bhalu (a Himalayan bear), Red Panda, Himalayan Palm Civet, Snow Leopard and his wife 😉 were spotted and duly shot. 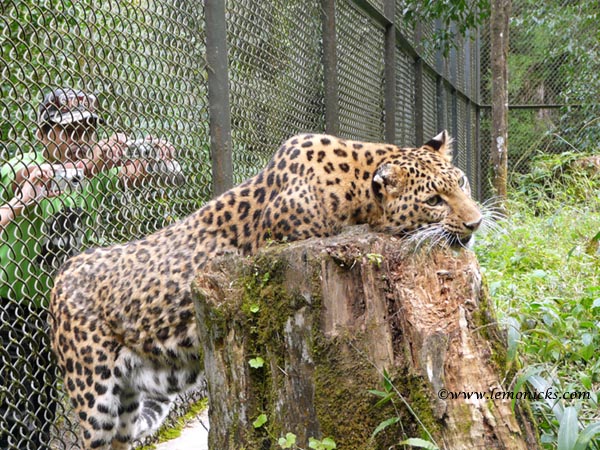 Hurry up Nisha ! I can’t keep this pose for long !

Next we went to Banjhankari waterfall where we also had our lunch. Details will come later.

Lingdum Monastery was our next destination where we spent our evening watching monks doing prayers and some dance practice. 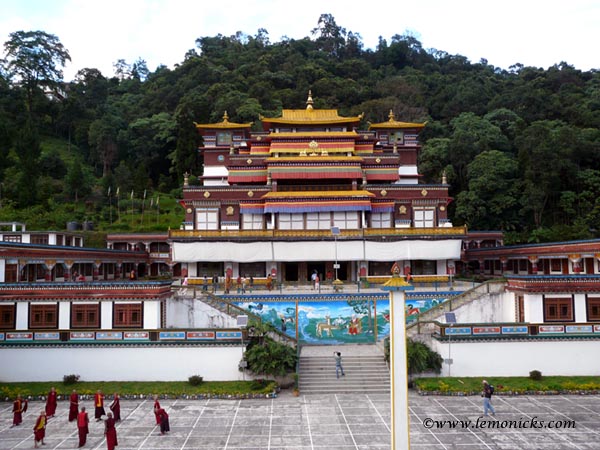 We could not have wrapped our day without visiting the famous mall road, could we? All shopping were done here before we headed back to the resort.

Next day was reserved for Nathu La pass. It was an exhilarating experience to say the least. All of us were awestruck by the beauty of our mountains at -3 degrees Celsius. We went up to the border and shook hands with Indian and Chinese soldiers, had hot coffee in Ice café before starting back.
It also needs a separate post…. Will do so soon. 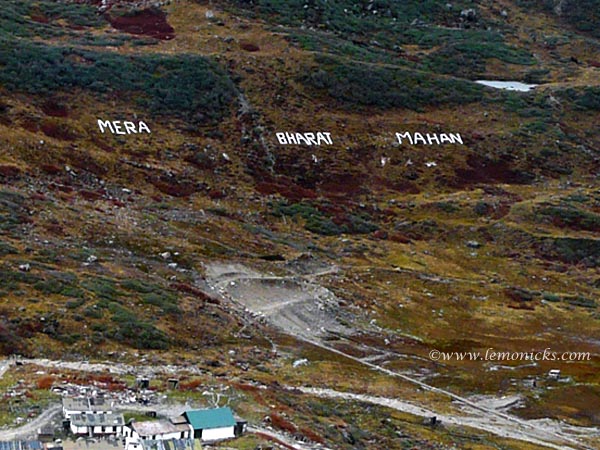 – – –
Final day was to return back and it turned out to be the most thrilling day of the trip. Keeping in mind the time taken from the airport to the resort, we had called for our respective vehicles at 6 AM. Only one turned up. Also, it was extremely foggy and nothing was visible beyond 2 meters. We waited for two things… the other vehicle and clear visibility. 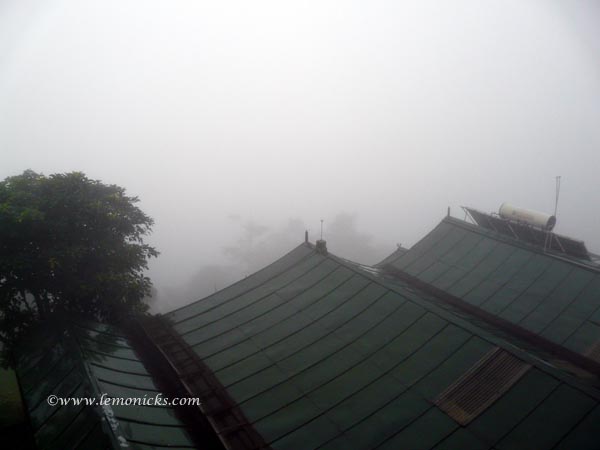 Other vehicle came well after an hour’s delay and along with him, he brought some clear sky. Though it was drizzling we had to start. Both me and Vamsee ran to grab the front seats … we had the privilege of throwing up when we see beautiful mountains. No one could afford to take panga (Readers, please give me an English word for this Hindi word) with us on our preferences.

It was raining on entire route and coupled with traffic jams made our nails shorter by incessant biting. 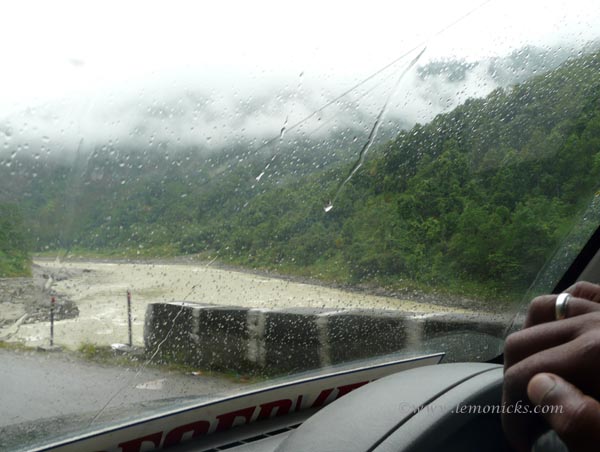 River Teesta flowing along the way

The story ended in a filmi style with us reaching the airport just in the nick of time. Me and Vamsee were scheduled for Bagdogra-Kolkata-Mumbai flight and rest were going via Delhi and their flight was already boarding !

In my numerous years of travelling, I have not seen so many women checking in anywhere in the world as I saw at Bagdogra airport. Can you believe women outnumbered men by 90-10% ratio ? It’s sure woman power.
Anyway, the other group was guided by the staff out turn and off they went.

For the two of us, the two flights were without any drama, was late by only 45 minutes in all and I must admit, I missed the thrill of what others experienced on their flights. Of course, Mumbai airport had some emergency that night but unfortunately we were not affected. 🙁

The story doesn’t end here for others though. Their Delhi bound flight was diverted to Jaipur because of bad weather. Kishi woke up to announcement “Welcome to Jaipur” and jumped out of her seat in bewilderment whether she had taken the correct flight or not. It seemed many passengers were in the same boat (I mean airplane) and soon it became chaotic inside the plane.

I do not have the intricate details but by the time this flight came back to Delhi, these people had missed their connecting flights to Bangalore & Chennai. Chennai people were made to stay in a hotel till next morning and Bangalore people reached their destination but without their luggage.

After midnight that day when I finally checked my twitter, Lakshmi had tweeted… “we have reached and now waiting for our luggage which is coming by next flight”.

Oh I definitely missed the thrill !

In spite of that, they were enquiring about our safety because of that emergency news but alas ! We could not provide them any entertainment.

Nonetheless, the trip was not the type I go for generally but fabulous in the company of good, enterprising and interesting people. It was great fun and I didn’t realize how time flew. I guess it was the people who made all the difference.

More than the place, the moments will remain etched in memories.

———
For regular personal updates, subscribe to this website by e-mail or on your reader. For those small stories and tit-bits that don’t always make it to this place check out my Twitter or Facebook accounts.

16 thoughts on “Thrilling finish to a memorable trip”

Ourselfie, our time together! I…

Read More »Ourselfie, our time together!

Before it finally says bye…