India’s toy or midget trains are small trains that run on historic railway lines up to a number of the hill stations in India. Although these trains are slow and can take up to eight hours to reach their destinations, they are quite popular among visitors. The mountain scenery is beautiful and makes the journeys really worthwhile.
As per my knowledge there are only four toy trains running in India, one each in four zones and each one of them being special in its own way.
1) East – Darjeeling toy train
The Darjeeling toy train is known as the Darjeeling Himalayan Railway, takes its passengers through the rolling hills and lush green tea plantations of Darjeeling in east India.
The train route runs for 80 kilometers from New Jalpaiguri, in West Bengal to Darjeeling via Siliguri, Kurseong, and Ghum. The tracks climb up steeply through a number of fascinating reverses and loops, one of them being Batasia Loop between Ghum and Darjeeling. It provides a panoramic view of Darjeeling on the hill with Mt Kanchenjunga in the background. The train also crosses more than 500 big & small bridges.
Fare includes the entrance fee to the Ghoom Museum where it stops for 30 minutes. 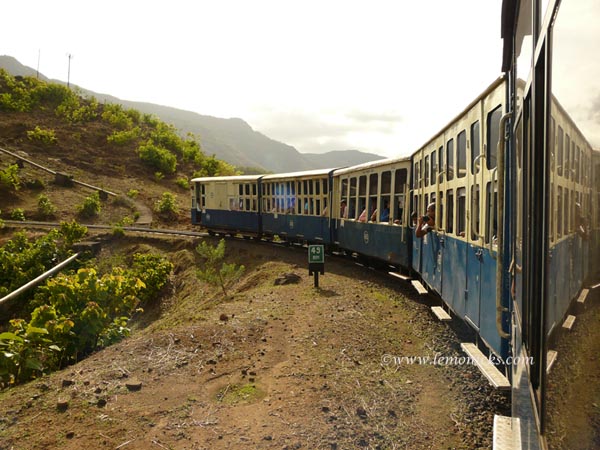 The Matheran toy train crawls its way in a zigzag manner up the hill from Neral to Matheran & back. Due to the steep slope, it takes around 90 minutes to cover the distance of 20 kilometers. The scenery changes from grassy slopes to shady tree covered hills. You can imagine how slow it moves by looking at food and fruit vendors jumping on and off the train along the way. The train stops at a couple of quaint stations where refreshments can be purchased as well. It also passes through one short tunnel interestingly named “One Kiss Tunnel“.

3) North – Kalka Shimla toy train
The midget train which takes us to back in time is Kalka-Shimla train. The distance is 96 kilometers through more than 100 tunnels & 800 bridges. The longest tunnel which is more than a kilometer, is near the main railway station at Barog. The captivating train route provides one of the most scenic train journeys in India and cheers up passengers. It gradually winds its way up along the steep narrow track through mystical mountains, pine forests and plenty of fascinating sights.

4) South – Nilgiri Mountain Train
The Nilgiri Mountain Railway toy train is the highlight of a visit to the hill station Ooty, in India’s southern state of Tamil Nadu. Do you know this historic railway line was completed 45 years after the first plans were drawn up and the steam engine was made in Switzerland ? The engine is usually changed for a diesel one at Coonoor to provide greater traction for the steep climb to Ooty.
The blue train runs from Metupalaiyam to Udagamandalam (Ooty) via Coonoor, in the Nilgiri Hills. The track is 46 kilometers long through 16 tunnels and tall girder bridges. This journey is picturesque because of the surrounding rocky terrain, tea plantations, and forested hills. Coonoor, with its world famous teas, is a tourist destination in itself.

I have experienced two of these journeys. What about you ?
——-
P.S.-This article belongs to Le Monde-A Poetic Travail. If you are viewing this on a website instead of your RSS feed reader, then that website is guilty of stealing my content. Kindly do me a favour. Please visit my site and help me taking action by letting me know against this theft. Thank you.
If you like this site, I suggest you to connect with me through Facebook fan page and Twitter.

A Complete Guide to Eurail Passes

A train journey shows us the real India

Kindness on the road. We…

Read More »A train journey shows us the real India