As I alight from a luxurious bus from Kuala Lumpur, the first thing I notice about Malacca is its distinctive color. Standing there on the road I turn full circle and cannot believe my eyes. The buildings, doors, the pavements, and even the hoardings… everything in the vicinity is red. 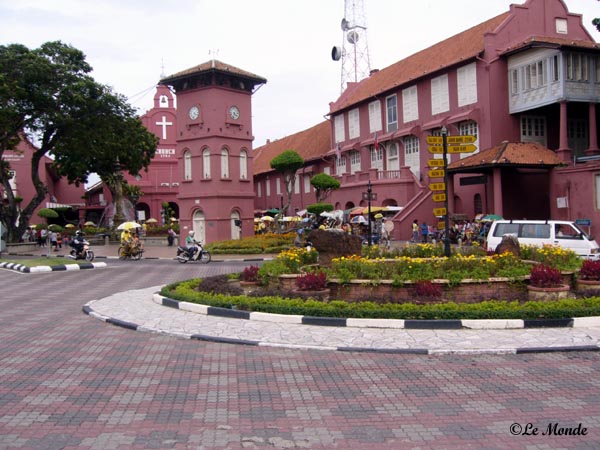 Have I landed in a little girl’s dream world? I am so awestruck that I almost do not notice the other distinctive characteristics of this quaint town; the Trishaws and the river on the other side of the road.

Colourful, vibrant and flamboyantly decorated, the trishaws line up at the stop and wait for their day to start, with tourists obliging as they head for their hotels and guesthouses. They call out to me. Having just arrived I needed to feel the city first. I assure myself a Trishaw treatment later in the day. 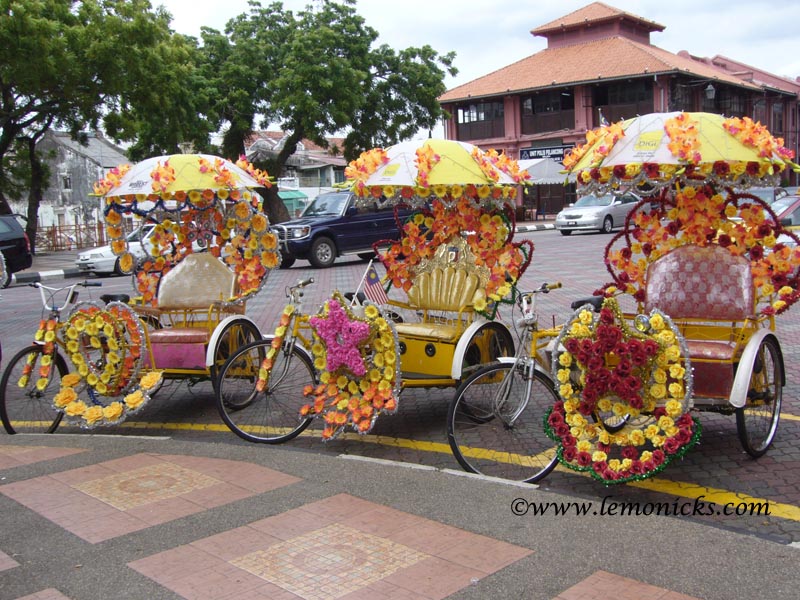 Behind them I notice a building. It is a simple yet elegant church painted in coral red. History has it that the Dutch built this in 1753 after they took the town from the Portuguese.

I walk up to St. Paul hill. Up at the top are the ruins of St. Paul Church. Like Christ Church, St. Paul Church is one of the many fascinating heritage attractions in Malacca that has gone through several stages of change under colonial governance.

It is easy to get around on foot or by Trishaw to explore the many places that make Malacca unique. With slight breeze and white fluffy clouds on a sunny day, the weather is just perfect for a walk. I try to absorb the essence of this small UNESCO heritage town. It looks like a freshly painted very old city, yet I can see new malls and tall buildings in the background. The charm of old permeates the whole city in more than one way.

Rich in cultural heritage, Malacca is a small city south west of Kuala Lumpur. It has Chinese influence but one can discern traces of Portuguese and Dutch too.

Malacca, also known as Melaka, can also be called a city of museums; and one museum not to be missed is Baba Nyonya Heritage Museum. This museum illustrates how rich and affluent Chinese merchants came here and settled. The first merchant married a local Malay girl and thus they became the first couple of this dynasty and hence the name of this museum. Housed in three two-storied adjacent buildings, it has treasured and portrayed their lives through generations, including their culture, lifestyles, clothing, vessels, rooms and their stories.

After a cool drink I set out for, Porta de Santiago, also known as A’Famosa, a 16th century Portuguese fort. Although only a crumbling gate remains this is the most photographed landmark in Malacca. Even now, it is surrounded by snap-happy visitors. They say, “You can’t claim to have visited Malacca if you haven’t seen A’ Famosa.”

Some say A’Famosa is merely a photo stop opportunity, while others claim that it is one of the town’s most indispensable relics, which once formed a stately circle of stone around the entire city. At the time of their conquest of Malacca in 1511 the Portuguese used 1,500 slaves to construct the mighty A’Famosa fort as a stronghold to defend against invasion. Today it is one of the oldest surviving European architectural remains in Asia.

By the time I cross the bridge to Jonker Street, it is evening. The sun settles and the air has become cool. If you are going to Malacca Jonker Street is a must-see, I was told. The narrow street, located in Malacca Chinatown, is also called Jonker Walk. Not only does it offer good food, entertainment, souvenirs and artifacts from different colonial periods, but also leads to the famous Cheng Hoon Teng Temple.

The Cheng Hoon Teng Temple, located at the heart of Malacca Chinatown, is a historical monument that has survived the ravages of time. It is the oldest functioning Chinese temple in Malaysia, founded in 1645. Visitors offer prayers by lighting candles and incense sticks. After the prayers, the burning incense sticks are placed in large urns filled with sand and ash. At the door there is one incense stick that is even taller than me!

There are a few other temples as well, including a Hindu temple. If you want to enjoy them all in detail set aside at least two days.

A gentle stroke of cool air caresses my face as I take an after-dinner stroll along the river Malacca. It is night and the quietness at the promenade suggests it is time to sleep.

What I have described here was only one day in Malacca, there is much, much more to see and do if you have the time to explore further.

There are plenty of Melaka hotels to stay in. There are some on the main Jonker street and some slightly inside the town.
= = = = =
Malacca is a place where I would want to go again & again. Not only because it’s a heritage city but it has something that I simply can not ignore. A quaint town with modern infrastructure it has everything that a person looks for. Rich in cultural heritage, Malacca is a small city south west of Kuala Lumpur. It has Chinese influence but one can discern traces of Portuguese and Dutch too.

4 thoughts on “A day in Malacca – Malaysia’s red town”

Mumbai Heritage Walk So we…