First woman to visit from India !

Nearly 4 years back, I had landed at a small place in Thailand at the fall of the dusk. Room hunting was my first priority before it got too dark and after walking a bit fortunately I saw a guesthouse on the main road itself. Only two rooms were vacant on the 1st floor. After checking both the rooms, I chose the cheaper one. The other one had a TV and a small balcony. I did not want any of those.
At times I am so careless that now, while writing his post, I realize that I had checked the rooms only for cleanliness and nothing else! Not even for a bolt !

Probably I was inebriated? After a 28 hour long train-bus journey from Malaysia, hurdles of overland border crossing, alighting in Thailand and deciding a direction for onward journey had made me like that? 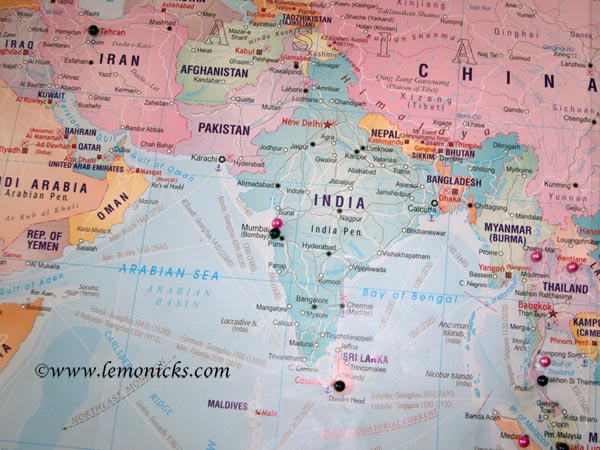 Anyway, the small guest house was run by an American who never had any qualms in getting up from his desk to clean the table or attend to customers. When I wrote my address in the register, he curiously looked at it and said “Oh, India”. Smiles were exchanged and we were on our own.

Next morning after giving me directions for a bank, he requested me to accompany him to a community hall just 50 meters away. There he guided me to a world map on a wall, gave me a pink headed pin and requested to mark the place I came from.
Apparently all the guest houses, motels in that little place had found a way to gauge the traffic flow with the help of that map…. about the people who thought the place was worth a visit. 😀

Visibly happy, he told me I was the first Indian woman to land there, and that too staying in his guesthouse!

While I could notice, there was literally no place left for Americans and Europeans to pin their places, I felt lonely out there on the map. 😛
As you can see, only one gentleman from India had come before me and no one from neighbouring countries.

**** Dark blue pins are for men, pink for women.
If you want to travel places with me, I suggest you to join me on my Facebook travel page.

Tags:picture of the moment
previousHow to go to Pagsanjan Falls
nextApam Balik – A Malaysian Street Food

14 thoughts on “First woman to visit from India !”

Picture of the moment: Hola…

Picture of the moment: Jeepney…

Picture of the moment: Atomium,…