Kindness on the road.

We meet many people on the road, both locals and travelers alike who help us in time of need or distress without expecting a return. Last week of every month I bring you stories from travelers who have experienced kindness on the road and like to share and spread it for the love of travel.
This month’s story has come from Md Arif Rahman of Indonesia who takes us to America.
Over to Arif Rahman.
= = = = = 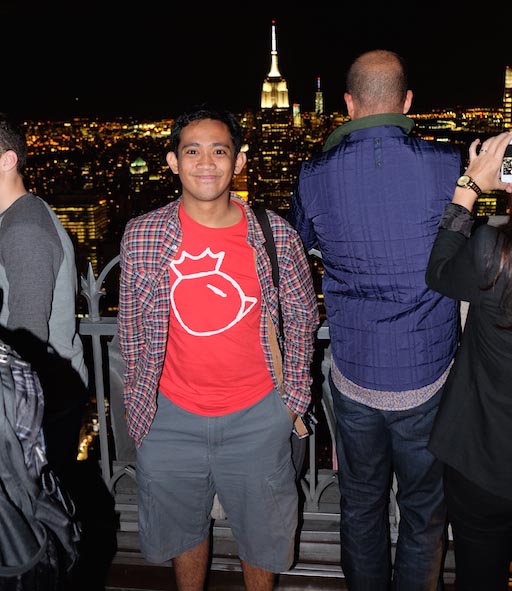 When I told my friends that I will go to (United States of) America, I got many responses from them. Some of them said that going to America will not be easy because I have Islamic name, some of them told me that they are afraid of my safety because of the criminality rate there, but the good part was, many of them supported me to go there and they also introduced me to Indonesians who live in America.

“I have friend in Boston.” “You can contact my friend in New York.” “You can stay in my cousin’s house in Chicago.” were few of some supporting responses. Chill out guys, because, first, I had to deal with the American visa.

Getting the American visa for Indonesian people was quite tricky, because we have to pay the visa fee first, before dealing with the long queue at the embassy. I was little bit nervous when I got my turn to give the visa documents to the immigration officer. Finally after queuing for three hours, I was here.

“So, what’s your name?” An officer that looks like Matt Damon greeted me from his desk.
“My name is.. Aa..arif, Sir.” I was stuttering.

“And, why do you want to go to America?” He looked deeply into my eyes, without love desire, to be exact.

I bowed, before looking at him with shy, “I won blog competition.”

That was the beginning; my story in America will start soon after Matt Damon gave me a letter to take my visa in four working days.

They said that going to America will not be easy if you have Islamic name or come from Islamic country, especially after the 9/11 tragedy.
I was arriving at JFK airport, queuing in the immigration line, before an officer took and examined my green passport, Indonesian passport.
“Mr. Muhammad Arif Rahman?”
“Yes, Ma’am.”
“Follow me.” She put my passport into a green transparent plastic folder, and escorted me to a small room in the corner of arrival hall. A small room full of police officers in blue uniform. 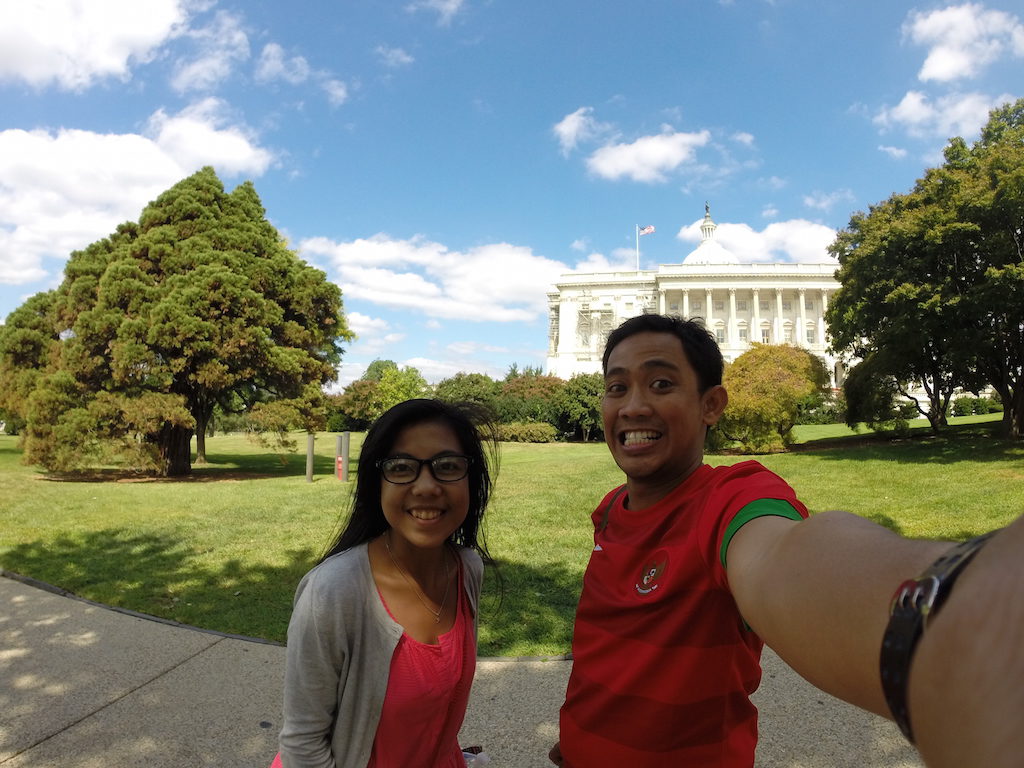 Days before I went to America were an exciting ones. I always love making itinerary −searching accommodations, planning daily activities, booking transportation mode, etc., and I want my itinerary to be as perfect as I wish.

“In New York, you can meet my friend Tenny.” Nuri, my friend, told me. “If she is not busy, maybe she can walk you around New York.”
“Oh, really? That will be nice.”

On the other day, I met my other friend, Nindya. I was looking for her help, arranging my trip in New York, since she was there before. She helped me picking the most suitable room on airbnb, following to my budget.

“So, what is your plan after New York?”
“Probably going to DC, Peoria to attend the main event, then going back to Indonesia from Chicago.”
“Chicago?”
“Yes, Chicago.” She looked like thinking about something, “Why?”
“Uhm, actually, I have cousin in Chicago.”
” … And?”
“You can stay in my cousin’s house in Chicago.”

For more than two hours, I was stranded inside a small room in the corner of arrival hall JFK airport. Inside, while many police officers −that remind me of NYPD serial− go back and forth in front of me. At a time, they handcuffed two Chinese people, out of the room, and the other time, they called people who have Islamic names.

One hour later, I was called to answer some questions from the police in front of me. The opening movie of My Name is Khan, suddenly appeared on my mind, the scene when Khan get interrogated when entering America.

“So, what makes you come to America?”
“I won a blog competition.” I gave him the invitation letter from my bag “From Caterpillar.”
“Hmm ..” He typed some data on his computer, before handing me my passport again.
“Welcome to America.” 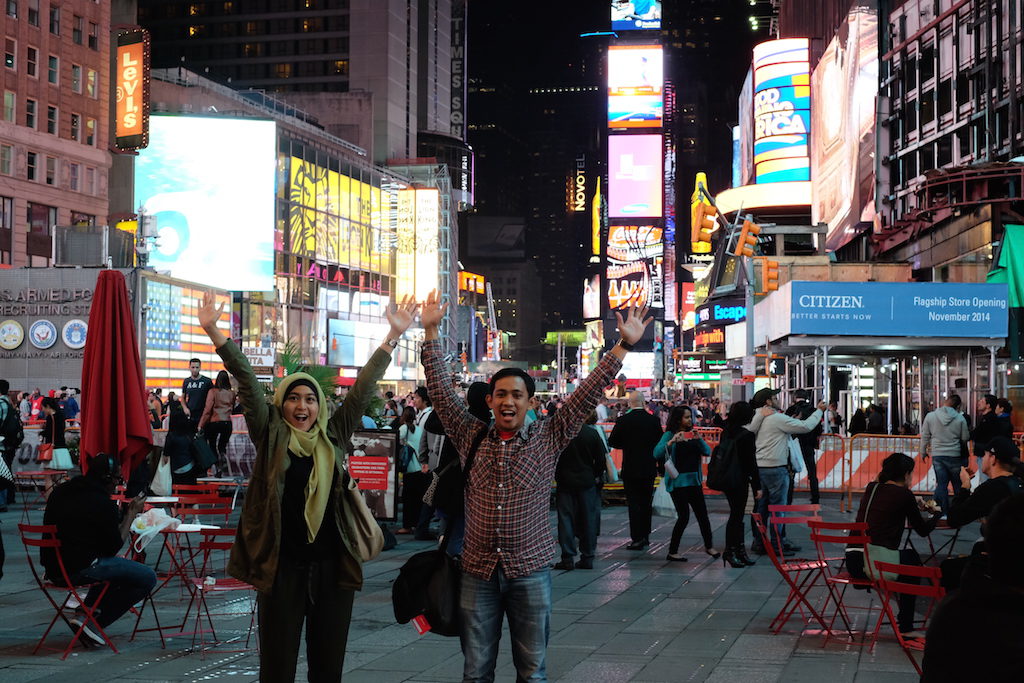 With help from Nuri, I met Tenny in New York. She was holding an umbrella with her boyfriend, Ali, when I met her under Manhattan Bridge. It was raining cats and dogs that night but they were so kind, “No worries.” Said Tenny, before accompanying me to take some photographs around New York, taking me for a dinner, and also escorting me to the famous Times Square area.

The other days, I met Sepsha, another friend that I was acquainted in Komodo Island. She was on duty from Radio of Republic Indonesia, to cover the news from America. Then, she joined my trip to Washington DC, and became a good travel mate for days.

When I was in Chicago for my last days in America, Kiki (Nindya’s cousin) picked me up with her husband, Ivan and her two children. They let me stay at their beautiful house, took me for a city tour, and made me Indonesian food for breakfast.

Thank God, I met these people who helped me to get a feel of America, to survive America, and the most important thing, to make me feel at home.

My name is Muhammad Arif Rahman, I am a traveler, and I am not a terrorist.

Muhammad Arif Rahman, is a travel blogger from www.backpackstory.me, Indonesian best travel blog 2014 from Skyscanner Indonesia, and 2015 from Blogger Camp Indonesia. For now, Arif lives in Jakarta as a daily worker, part-time travel blogger, and lifetime traveler.
Arif is a very good friend of mine, a thorough gentleman and a very helpful person. And, his wife makes awesome brownies. 😀 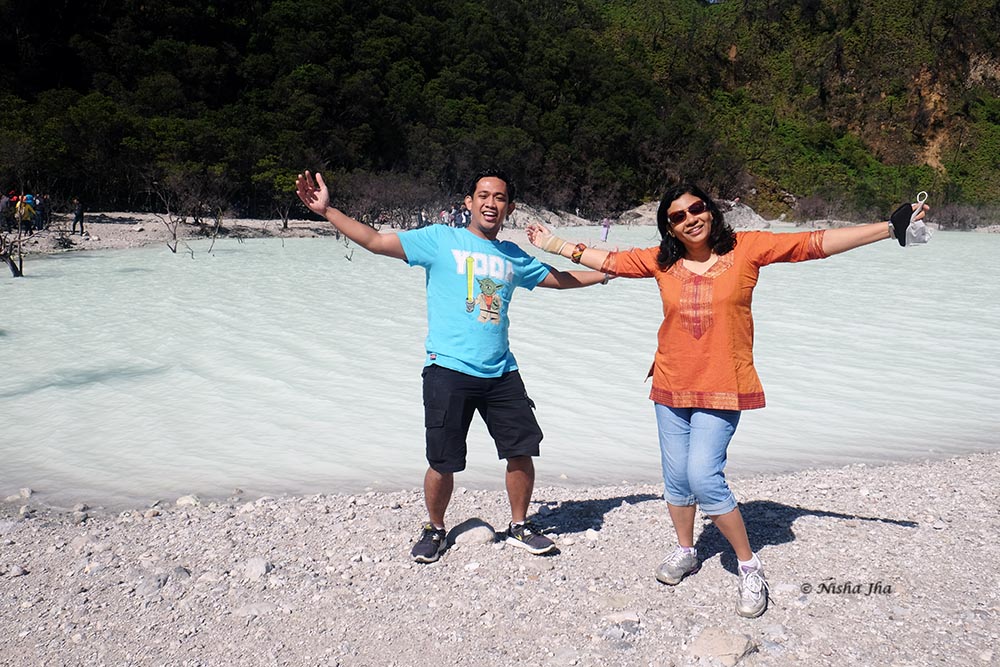 This pic of me and Arif is only for reference, nothing to do with story.

It’s about Kindness on the road. And the people reinforce my belief that the world is not that bad. You may want to read some other posts on the same theme.