This month’s story has come from Ajay Sood who takes us to China. It is a kindness story with a twist. 😉 I am sure, Ajay would make you smile or should I say laugh? 😀
Over to Ajay Sood.
= = = = =

While this is a tale of some quirks of fate that took me to Beijing, it is also a story-with-a-funny-twist about genuine help extended by strangers who did not know my language, and about what that ‘help’ landed me into. Come, join me in my journey! 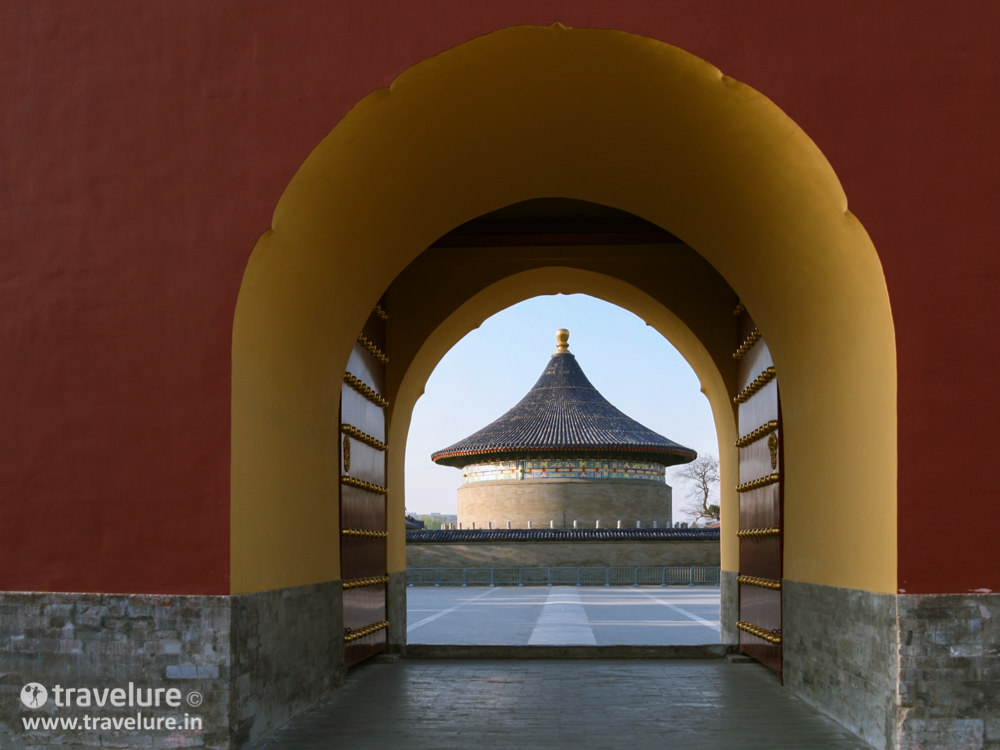 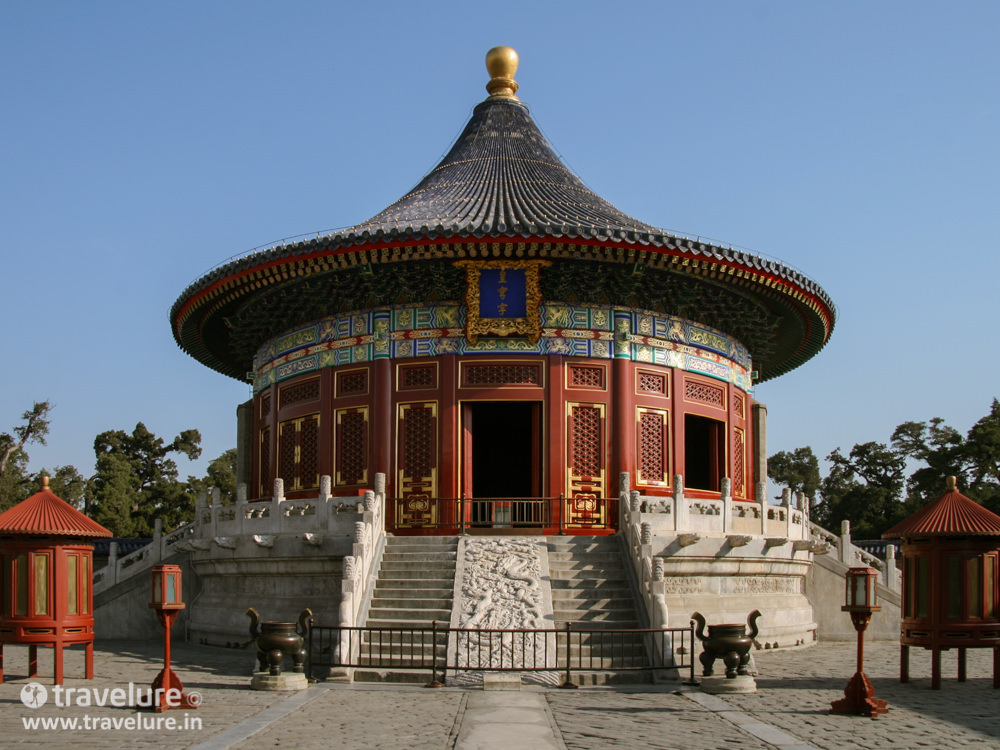 How destiny took me to Beijing

It was early summer, 2008. My New Zealand trip had fallen through as the unscrupulous travel agent who had connected me to the NZ DMO (New Zealand Destination Marketing Organisation) and had organised my fam, wanted me to influence my wife for her company’s MICE business at screwy terms.

I had already applied for and got my leave sanctioned.

Around then, Beijing was in advanced stages of readiness for the Summer Olympics. Globally, their PR machinery was actively telling the whole world how hospitable and prepared they were.

Together, these circumstances conspired and got me to plan an otherwise unscheduled trip to that city. For me, China, and more specifically Beijing, had always held a mysterious allure!

Beijing and Travelure, the Tourist

I was going to be in Beijing for over a week. Knowing how much the city offered, I chalked out elaborate plans by going through blogs, travel sites, querying knowledgeable people on web forums, and more.

Additionally, I had blocked off a complete half day from sunrise to mid-afternoon for a visit to the Temple of Heaven.

The Temple of Heaven and the centre of the earth 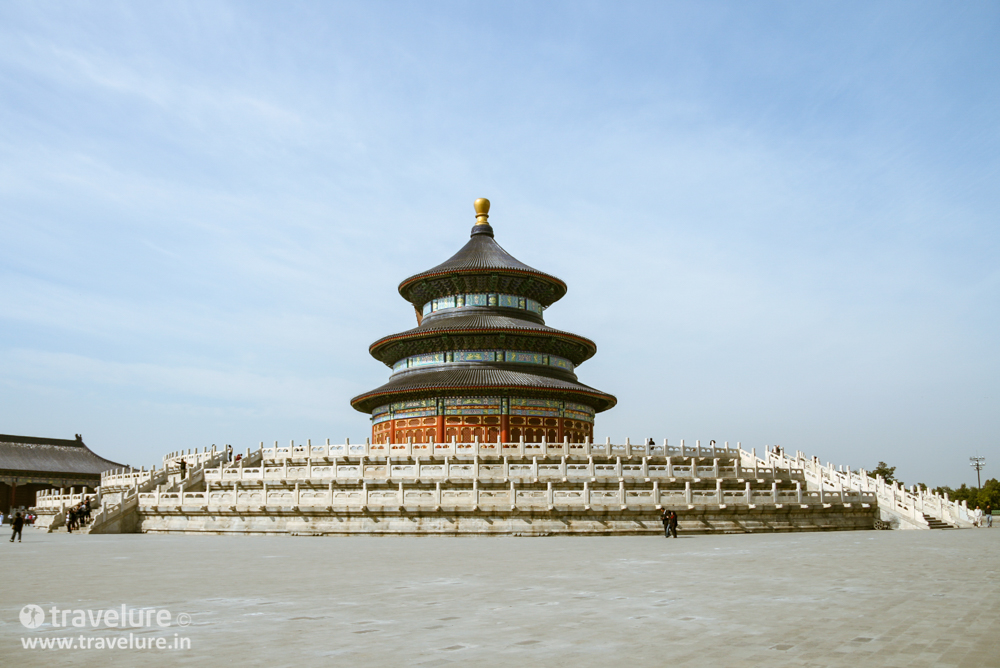 For those who may not know, let me share my reason for earmarking so much time for my visit to this temple. It certainly had nothing to do with the old Chinese belief that the temple was the centre of the earth.

Situated in the heart of Beijing, the Temple of Heaven is approximately four times the size of the Royal Palace (the Forbidden City). It occupies a whopping 2,700,000 sq mt area that is a shade smaller than the 3,410,000 sq mt Central Park in New York. The Chinese ruling dynasties had ensured that the abode of God was much larger than their own humble quarters!

My research had also thrown up that the local Beijing folks used the temple grounds for their morning walks and workouts. Interestingly, these workouts were different from the usual yoga and jogging we may be used to. The diverse workouts included, but were not limited to, the niche martial arts practiced only in South East Asia. Here, Kendo, Tai Chi, Karate, Kick Boxing, Jiujitsu were practiced alongside the more sedate, traditional and graceful fan dance and ballroom dances.

Also, this early fifteenth century UNESCO inscribed temple complex has some architecturally superb structures like the Hall of Prayer for Good Harvests, the circular mound altar and the Vault of Heaven (Treasury of Heaven).

I primarily wanted to photograph all this action as well as the capture these medieval heritage monuments. So, common sense dictated that I provide myself ample time there.

My day at the Temple

I was excited. Just before sunrise, I rode a taxi to the Temple Complex’ North Gate. While scores of local folks were walking in freely, I had to wait for the ticket booth guy to give me the ticket and my change. 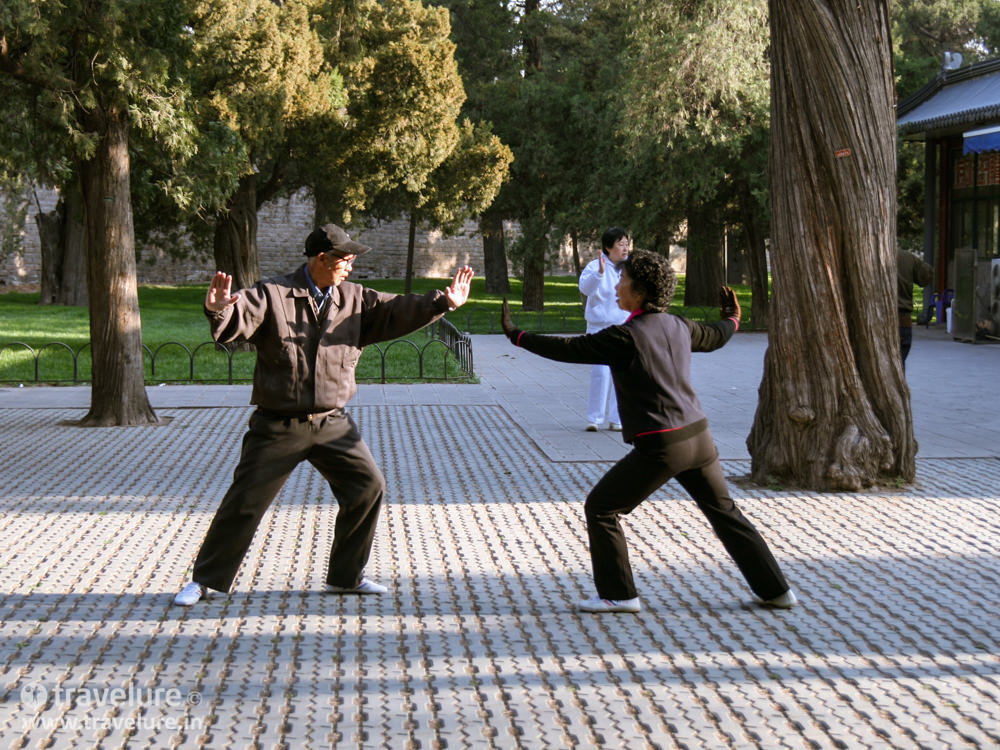 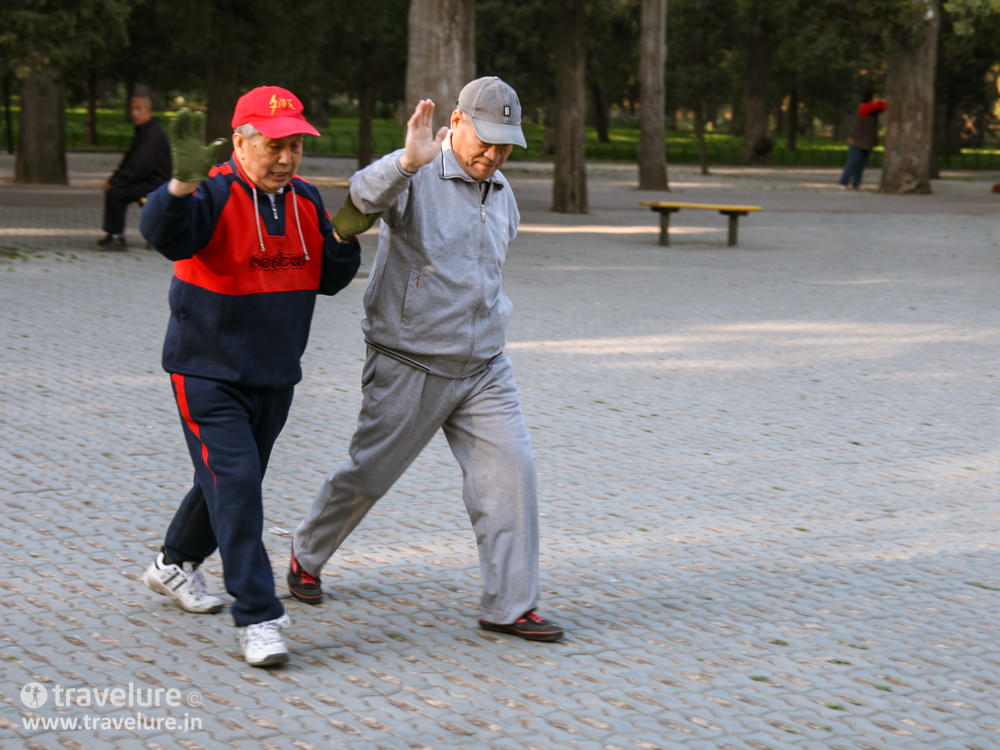 A walk with workouts

Once inside, I decided to keep the photography of the heritage structures for later when the light would be better, and instead chose to shoot the morning workouts action first. Like a little child, moving from one green quadrangle to another, I was gleefully capturing the strange, yet precise, routines I was witnessing. The groups of workout-ers represented all age groups. Time flew. Sometime later, a casual glance at my watch told me I had already been there for over 3 hours. It was time for me to move on and shoot the structures!

It was then that I realised the expanse of the complex.

Those days, I used to be naïve and was carrying a ton-load of camera gear. As I made my way from one structure to another, I felt my steps getting heavier. Regardless, I charged on gamely; or at least, till I had this shooting pain making its way up my left leg! 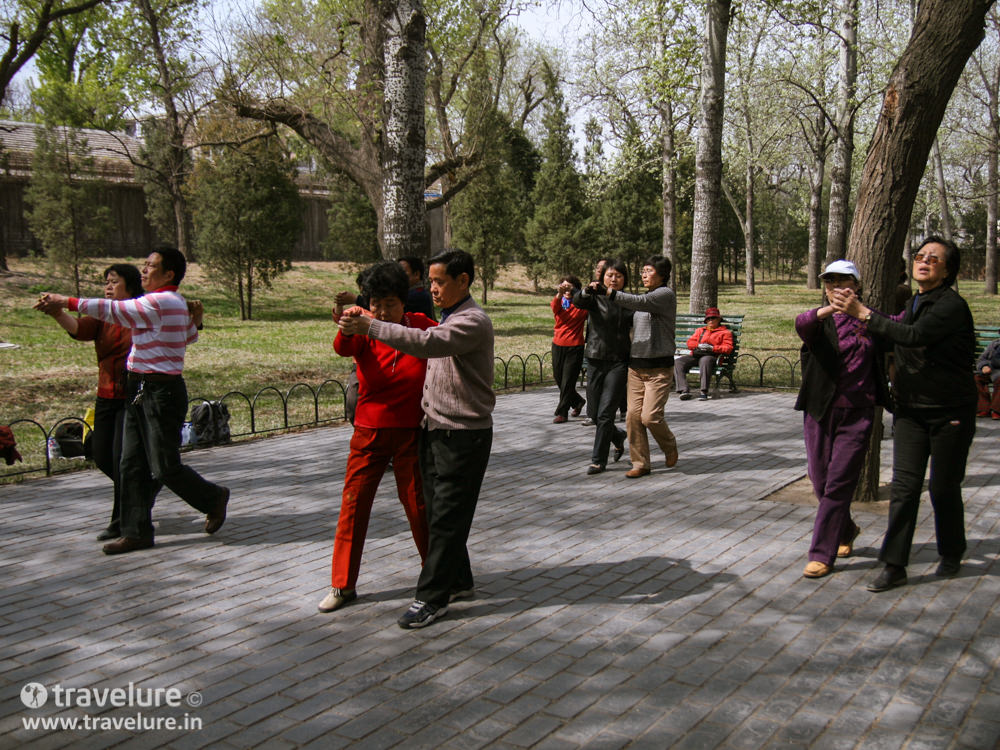 Diligence had me complete my planned shoot. By which time, the pain had increased exponentially. I dragged myself towards the nearest exit from the complex – the East Gate. Once there, I stumbled upon this group of ball room dancers and asked them if they could guide me to a pharmacy.

Realising they did not know English (or Hindi, or Punjabi, for that matter), I switched to sign language. I was single-handedly playing dumb charades with the group, which by then had given up their dancing and had gathered around me.

I gestured by contorting my face, pointing towards my aching leg and making hand signs indicating that I needed a pain-relieving spray. Noticing their blank faces, I repeated this act several times. Voila! Suddenly, one of them seemed to understand what I was seeking!

Animatedly, that 50-something Chinese gentleman started giving me directions – hand signs, and a lot of Chinese words. While I was focussing on his direction-providing charade, I noticed some mirth amongst his other group members. Since my pain was acute, I ignored the reactions of his fellow group members and gave all my attention to those complex directions, which broadly asked me to go straight ahead, hit the main road, not take the first left, but turn into the second street on the left, walk about 100-150 mts, go up a four-storey mall to find my destination.

Profusely thanking the entire group and bowing multiple times (I fathomed that was the ritual of thanks to follow in China), I limped away.

I followed those directions precisely and found myself facing a dilapidated graying building. The electrical wires hung precariously all around its façade. The signboards in Chinese communicated little to me. In that maze of signage, I tried looking for a green cross – the usual indicator of a pharmacy – but failed miserably.

My excruciating pain settled it all. My only choice was to enter the building, look for an elevator and make my way to the fourth floor. But, as they say, trouble always strikes in ‘threes’. There was no elevator! Language issues, a limp and a lack of elevator were all I needed!

I slowly and painfully climbed to the fourth floor and my worst fears came true. I was not in a pharmacy, but was in the ‘stockings’ section of a rather run-down apparel store. That’s when I figured that acting is definitely not a career option for me. All that those helpful folks could make of my elaborate sign language was that I was looking for ‘stockings’.

Despite my pain, I just couldn’t help smiling! Cheers to the kind people on the road!

PS: Yes. I did find a pharmacy nearby. Yes. Only women manned it. Yes. I asked them to get out, bolted the doors of the pharmacy, took off my jeans and used the spray. Yes, it did relieve the pain!

= = = = =
Ajay Sood (Travelure)
Winner of OSM (Outlook Social Media) Shutterbug of the Year 2016, Ajay shares his travel stories on www.travelure.in. Besides regularly writing for numerous travel and photography magazines, he is an international speaker on travel and architectural photography. On a mission to make destinations desirable, he has already travelled to over 35 countries.
His social media handles are:

You may also want to read some of the earlier posts on the same theme.
Kindness on the Road
Surviving America
Good deed not dead!
Lost and found

Kindness is Everywhere in Iran