All cities in India (also in the world), save a few, have evolved from one or more villages. Their strategic location made economic progress and acted as a magnet for people from other habitats to grow into a metropolis.
Mind you, not all the villages and towns end up (read grow up) into cities…fortunately. 🙂
On the other hand, a few cities are built from scratch.

Chandigarh is one such city. The city was originally envisaged to be the capital of Punjab but eventually, after the birth of Haryana ended being the capital of Haryana as well.
I think this is the only city in the world that is the capital of two different (also too different! ) states. The initial plan of the city was done by an American and completed by Le Corbusier, a swiss born French architect and town planner. The French connection, unfortunately, ends here. 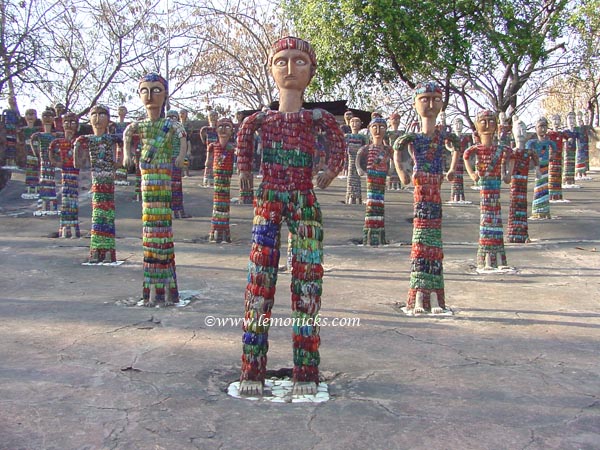 Figures made of glass bangles at Rock garden.

There is nothing similar to any French town or city!
Chandigarh is of course one of the cleanest and richest cities of India and is often regarded as the gateway to northern Himalayas, being situated at the foot hills of Shivalik ranges and pretty close to Simla.

Chandigarh in its grid like structure has its own touristic spots, although many times you only are in transit spending a few here before moving on. Both my visits to Chandigarh were a stop over, once while going to Dharamshala and other when visiting Kulu and Manali.

The Sightseeing tour of the city always commence with a visit to the world famous rock garden. Most artifacts are made out of waste material. It has got to be seen to be appreciated. No photos will ever bring out the life of these rocks!
There are, of course, several more conventional gardens such as the Rose garden, fragrance garden, terrace garden and so on.
A water body in an otherwise dry area, Sukhna lake, a few kilometers away, offers a great picnic spot.

The city has its share of great eating places, malls and museums and huge government building and educational institutions.
Geri route is an interesting neighbourhood, frequented by youngsters (read young couples) as a meeting place to hang around.

Also, many adventure tours originate from Chandigarh to the Himalayas and hills stations.
P.S. – If you want to travel with me on my journeys, I suggest you to join me on Facebook by ‘liking’ my Facebook fan page.

10 thoughts on “Chandigarh, any French Connection?”