We were on our way to an unknown village to see some new-borns take their first baby steps and then swim into the sea! We are, of course, talking about the Olive Ridley Sea Turtles in Velas Maharashtra. This is a ritual that happens during the months of February, March and April in this otherwise sleepy village called Velas in Ratnagiri District, in the south of Maharashtra. 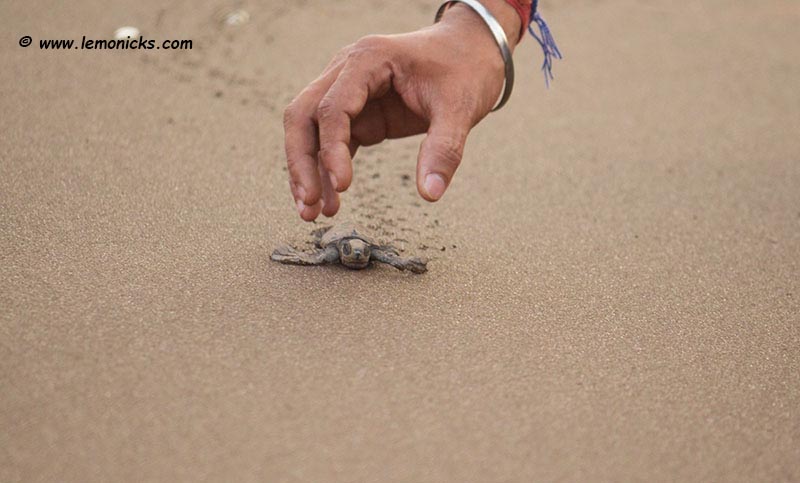 A few years back a friend mentioned to us about turtle conservation in this district on the western coast of India. We would have pooh-poohed the information as rumour had it not been for the stature of our friend. He was a wild life enthusiast, a naturalist and would definitely know about these things.

We had been reading for some time about the dwindling population of sea turtles and breeding-nesting seasons which is January to April. On an evening in February, we decided on a spur of the moment to go to Velas Village and experience what is now known as the Kasav Mahotsav meaning Turtle Festival. 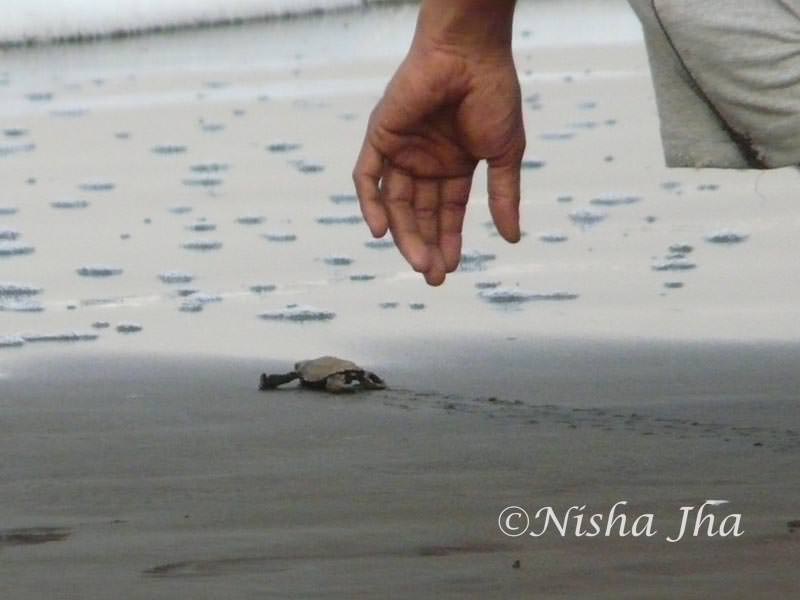 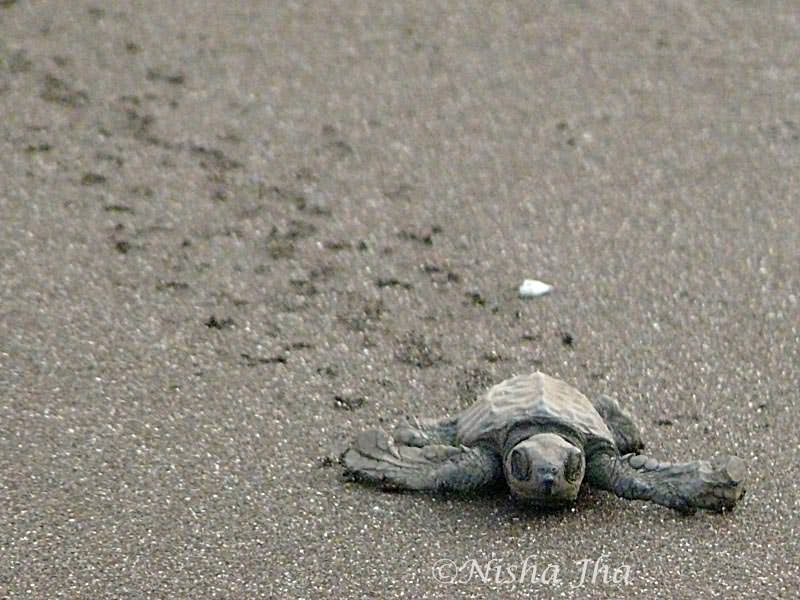 We waited for our transportation at the highway. It was already close to mid night and in our minds, we try to imagine what was in store for us at Velas. Velas is a small eco-friendly village in Ratnagiri. A few years back, an NGO named Sahyadri Nisarga Mitra, who were involved in conservation of dwindling population of various animals, found out that Velas beach was one of the many location where the female turtle comes to lay its eggs. They also found that while there was evidence of large number of nests, they could not find any intact eggs. They were perhaps poached by the villagers or animals. Also, when young ones did hatch they were again hunted by the predators.

The villagers were educated on the importance of saving these marine reptiles and thus was born Kasav Mitra Mandal in Velas. This was really win-win for them. They were able to help conservationists and also create a tourism opportunity to boost the economy of this village. 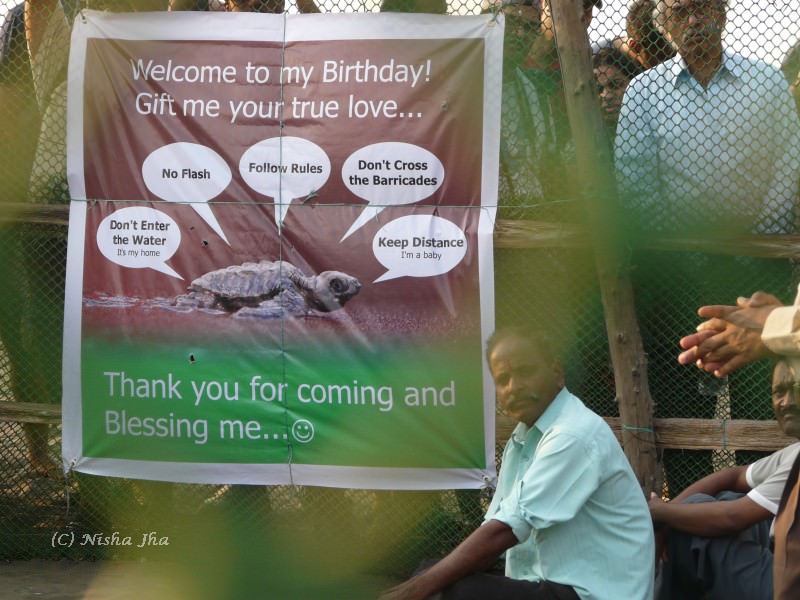 After a mostly uneventful journey we reached the village just in time for breakfast. Most of the village houses open their doors to the tourists for a nominal fee that includes all meals. This was homestay at its best. There were matrasses on the floor to sleep, men and women were separated into different rooms and a couple of common bathrooms. For breakfast we were served Poha, a tasty dish prepared out of beaten rice, which is very common in these parts.

The chief conservationist said that initially the villagers did not listen and did not even care about this new age hullaballoo about conservation and protection, which they thought were just propaganda to encroach on their daily lives. Persistent education bore fruit finally. Not only the villagers but also the fishermen had to be persuaded to release the turtles if they were inadvertently caught in their net. They were also trained to inform the NGO if they spotted any injured turtle which were then nursed back to health and sent back to the sea.

He then took us to the beach to explain the procedure. He told us that this was essentially the hatching season. The egg laying or the nesting season had started about 2 months back. The turtles travel thousands of kilometres every year, yet the most incredible part is the female turtle always returns to the same beach at which it hatched. How it does remember is no less than a miracle. The male turtles almost always never return to the beach at all. Another astounding fact is that the Olive Ridley sea turtles practice arribadas. It means large scale synchronised nesting. Groups of female turtles come ashore during a specific period for laying their eggs, pushing with their flippers till they reach far inside the beach for safety. The females may mate with multiple male turtles.

Every morning during nesting season a team of volunteers from Kasav Mitra Mandal would comb the beach for signs of turtle movement on the sand. Generally, you can’t miss the tracks as the turtles are almost 70cm in length and weight about 25 to 50kg and leave deep trails. The conservationist laughingly added “By the way they are some of the smallest turtles”. The volunteers follow the tracks to their end and start digging.

The turtles using just their flippers dig holes in the sand to a depth of 1 metre and lay up to 100 eggs in about 45 minutes! This is a very energy consuming and tiring process and they are often found to make hissing sound of laborious breathing. They then use their flippers to fill up the hole completely. All in the cover of darkness.

The volunteers dig deep but carefully so as not to break any eggs. Sometimes the tracks are false indicators. Some turtles are known to return without laying eggs or move to another spot on the beach. If eggs are found, then details are recorded with date, nest number and number of eggs. These eggs are carefully collected in baskets and taken to a designated area in the beach, which is generally fenced off to prevent predators from poaching the eggs. The eggs are then deposited in one of the series of holes dug for the purpose, fill it with sand completely, just like the mother turtle, and covered with a basket with a card mentioning the nest number.

This exercise is done for each of the nests found till the nesting season is over. After that is the long wait for incubation. Of course, the fenced off portion is protected adequately often with locks to keep away the curious onlooker. 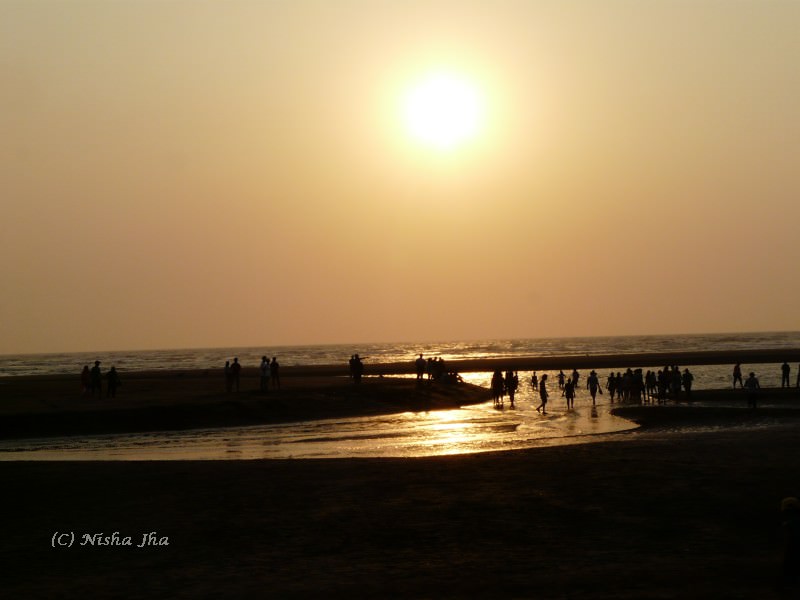 After seeing the fenced off area, we returned to our homestay. He had said that the uncovering of the nests would happen in the evening when the temperature dropped and cool enough for the young ones to come out. On our return journey, he explained that the name Olive Ridley was due to the fact that the carapace (shell) of an adult turtle is olive green in colour. Even the plastron (the underside of the turtle) are green-yellow. He smilingly said no one really knows why it was called a Ridley! We liked his honesty & forthrightness.

There was nothing much to do till evening when the baskets would be revealed to see if any babies were there. In all this while we had not seen a soul who we could identify as a visitor! Later we found, since this was a free time, people were either resting or exploring the little village or even hiking to a small fort, called Bankot, on the nearby hill giving a spectacular aerial view of the Velas beach.

For the visitors, the turtle festival begins when the incubation period of 45 to 60 days is over. Each day the volunteers uncover the baskets to see if any hatchlings have come to the top of their new nest. We wanted to beat the crowd and started from our homestay early to go to the beach. However, everybody seemed to have the same idea and the route from village to beach was thronging with visitors. When we reached the beach, we found a good crowd had already gathered around the fence. 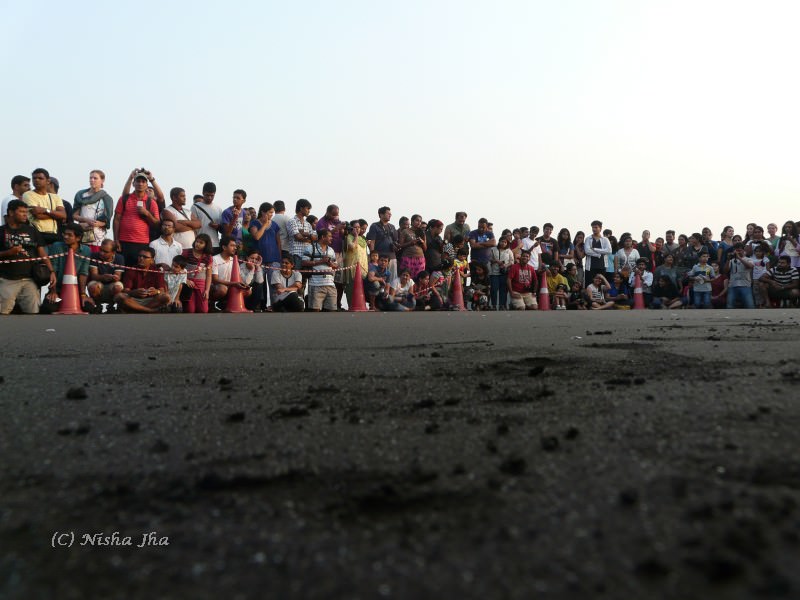 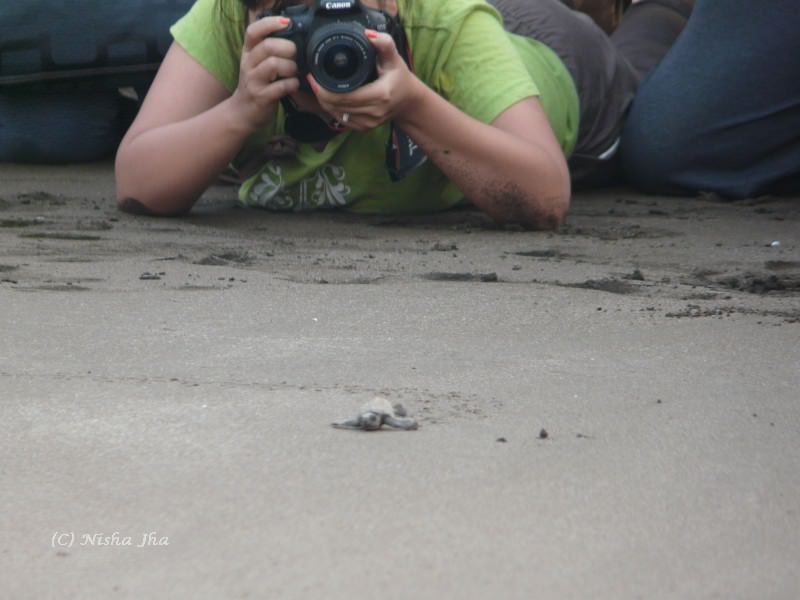 The organizers were dutifully making sure the viewers would be safe and not scramble over each other. We were glad to see a sizeable number of children in the crowd waiting to see the babies. This was a great family outing too, away from the bustle of the city. At last at the appointed time the organizers enter the fence.

There are several baskets to be exposed. Not necessarily each nest would have hatched. They uncovered the first, there was an audible sound of disappointment in the crowd. Perhaps the time had not come for the eggs of this nest to hatch. They covered the nest and opened the second for the same result. We were sure by now that the organizers were now playing to the gallery and sensationalism and that the last basket would have the babies.

It is yet another nature’s wonder that buried deep into the ground, when the turtle babies hatch they know instinctively to claw their way up overcoming the weight of the sand above. This was a protected environment, however in the wild they would face immense challenges by way of predators like fox, hyenas and sometimes even eagles and kites soaring high above. 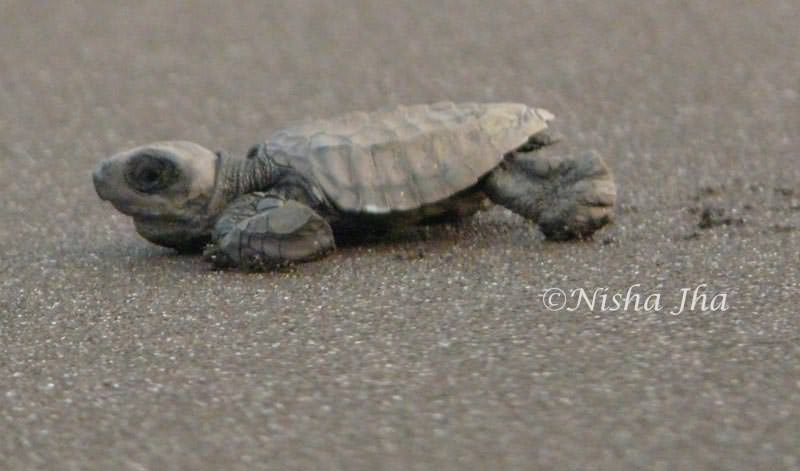 As expected the last one had the babies. What a magnificent sight it was!

We were all then asked to gather near the sea shore presently as the babies were collected and taken to about 70 metres from the sea and left on the sand to fend for itself. Here was another marvel! The baby is so small, just 10 cms or so, but knew exactly what it should do. It intuitively uses its baby flippers to propel toward the gigantic sea. For us even the thought how these babies would survive in the vast sea brought goosepimples. We could see them getting tired once in a while and just slopped on the sand for a while then started once again towards the sea. Eventually they were engulfed by water. The females would definitely come around sometime and the whole lifecycle continues!

This was definitely a festival with a difference. Observing a baby turtle coming out of the nest and then finding its way to the sea is a magical, remarkable and memorable event, in its life and now in our lives too!

How to get there: From Mumbai and Pune, there are several touring companies who conduct a 2D/1N trips to Velas. One can go in a private vehicle as well.

Where to stay in Velas: Almost every house is a homestay. One can walk-in and negotiate. Weekends are bound to be very crowded.

If you want to travel places with us, we invite you to join us on our feed or Facebook Travel page.
P.S.- This article, Olive Ridley Sea Turtle, belongs to Le Monde a Poetic Travail, an Indian Travel Blog, published by the travel blogging couple, Nisha & Vasudevan R. Reproduction without explicit permission is prohibited. If you are viewing this on another website rather than the RSS feed reader or our travel blog itself, then that website is guilty of stealing our content. Kindly do us a favour by letting us know via Contact Us. Thank you.

Soap for Hope – The Story of Recycled Soaps

For the last couple of…

Read More »Soap for Hope – The Story of Recycled Soaps