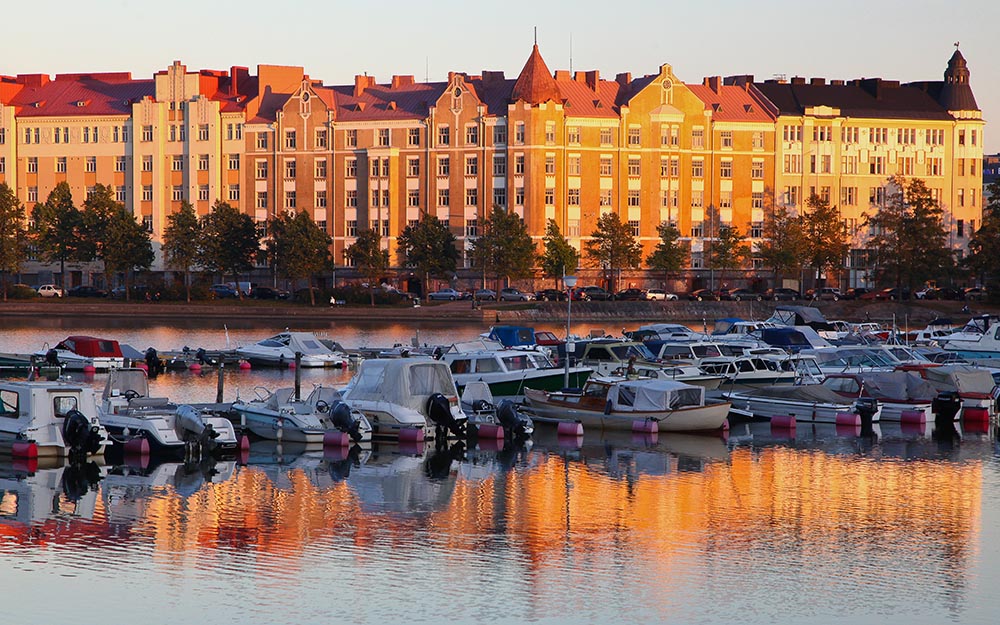 Whenever I visit a country for the first time, I observe things inquisitively and try to look for something which was not known to me. Finland was new for me and so was my curiosity for it. It was fun to know about this ‘cold from outside but warm inside’ country. Here are some random interesting and fun facts about Finland and Finns. Tell me, how many of these were known to you.

Things you didn’t know about Finland 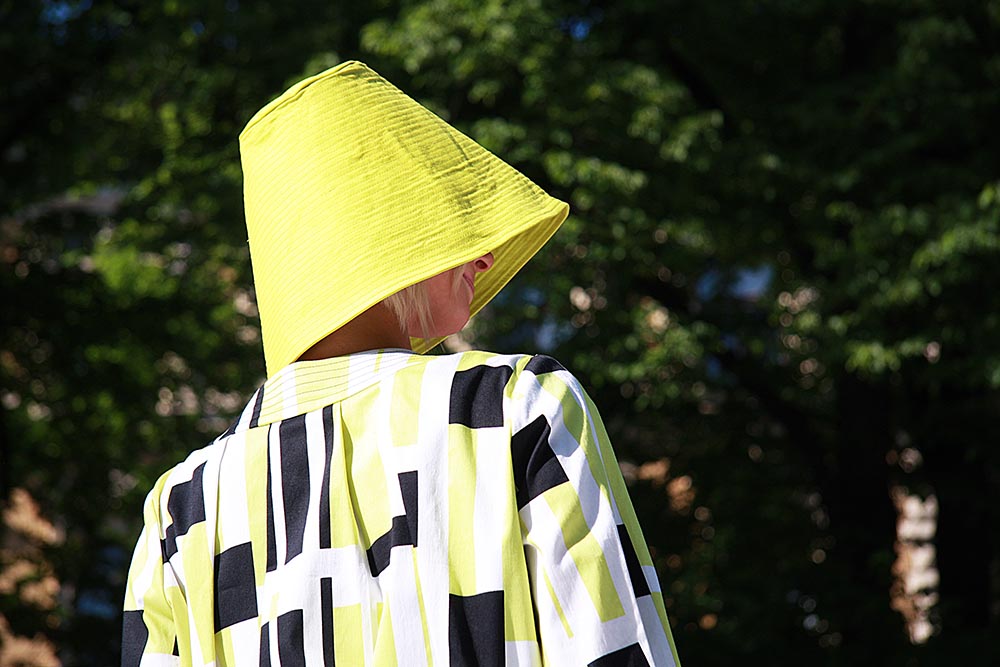 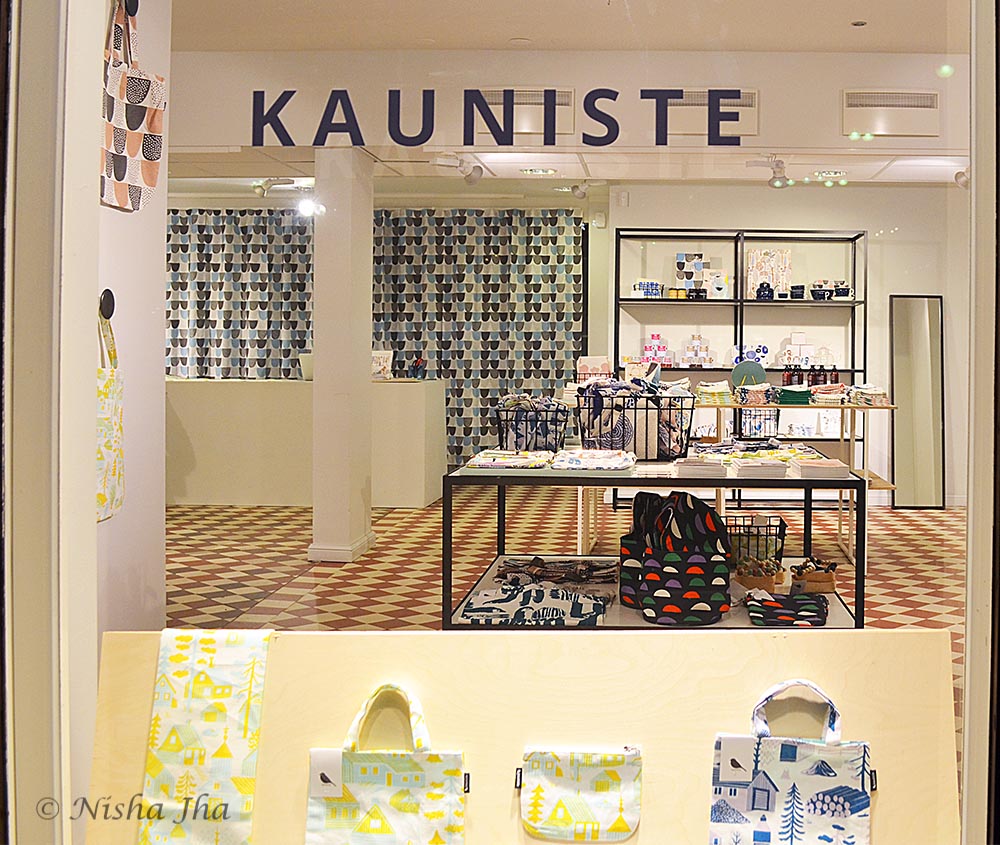 Finland is a design nation. Some of the world’s most celebrated and admired designers and architects come from Finland. Finland has been setting trends for decades. Helsinki, the World Design Capital has University of Art and Design Helsinki (now called Aalto University’s School of Art and Design) and the Design Museum.

Payphone? What’s that? Surprisingly, there are no public payphones in Finland! A country that is famous for “Connecting People” with Nokia mobile, you won’t find a single payphone within the territory of Finland. There are over 5 million mobile phones in Finland for a population of 5.4 million. But no payphones please! Except, perhaps in the museums.

Mobile network – Speaking of cellphones, the mobile network is very powerful. We used DNA SIM cards and to my surprise the network was available even in jungle! Be it a remote place in Lapland, in Helsinki city or inside the air-conditioned bus, your cell phone will never leave you alone.
And yes, SMS was invented in Finland! 😀 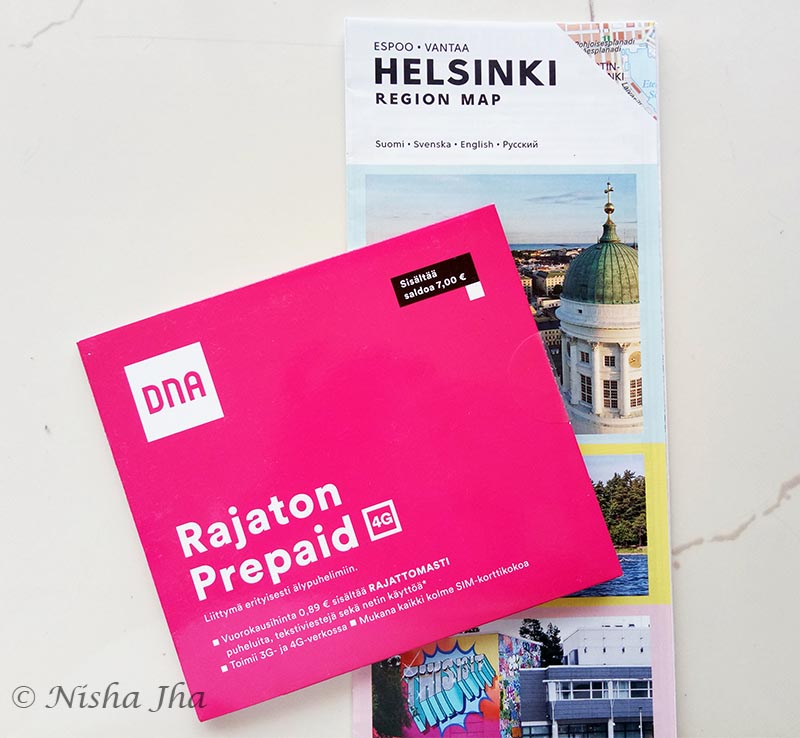 English language – If you are travelling to Finland and do not speak local language, worry not. I was surprised to see Finns speaking fluent English! Finland isn’t like other non-English European countries where only people working in tourism sector or in cities speak English. You will find English speaking people everywhere. In Finland learning two languages is mandatory and English is one of them.
I found that Finns are amongst the best English speakers in Europe. You’ll have no problems getting help. Except the very old, everyone speaks the language.

Finland is the most literate country in the world. Can you beat that? 😀 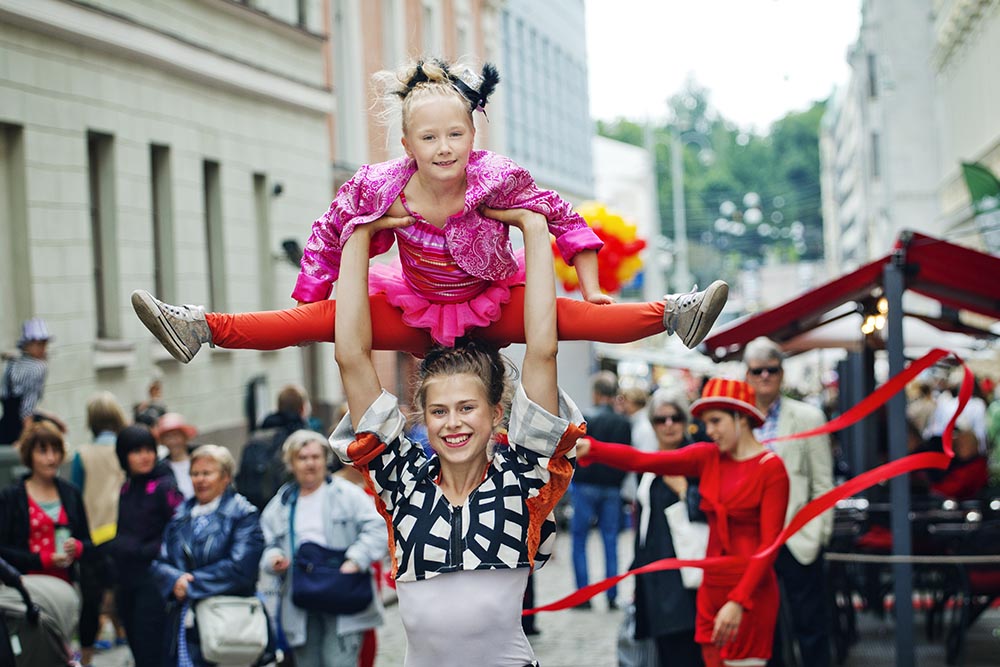 Helpful & friendly – I did not find a single person who was not friendly or helpful. Whether it was the capital Helsinki or up north Lapland, Finns always extended a helpful hand with a smile. So much so, they went out of their way to help us when we were lost. They drew maps, showed us the directions, guided us for shopping and so on.

Safest place in the world- Finland is one of the few countries in the world where lost wallets and mobile phones are returned to their owners. As per a Reader’s Digest global test on honesty, 11 out of 12 wallets deliberately left abandoned around Helsinki were returned. People feel safe walking alone in city parks or use public transport regardless of the hour. 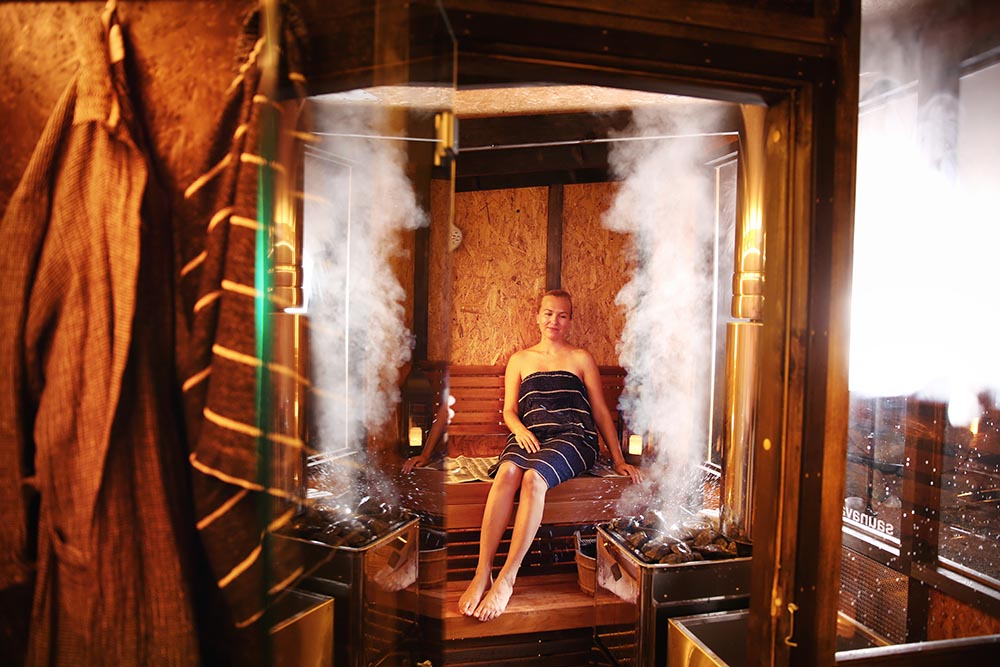 Sauna- It is a well known fact that saunas are a significant part of the Finnish culture. Do you believe, on an average there is one sauna per 2.5 people in Finland which translates to one per household? It is estimated that there are three million saunas in Finland. More than the number of cars they have.
Finns think of saunas not as a luxury but as a necessity. So much so, that a new Burger King branch in Helsinki has devised a brilliant way to distinguish themselves from other burger franchises … by opening a sauna and serving burgers inside spa. This sauna can seat 15 persons at a time.
The saunas are so important that they were set up and frequently used by Finnish soldiers even during wartime. Currently, 99% of Finns take a sauna at least once per week. 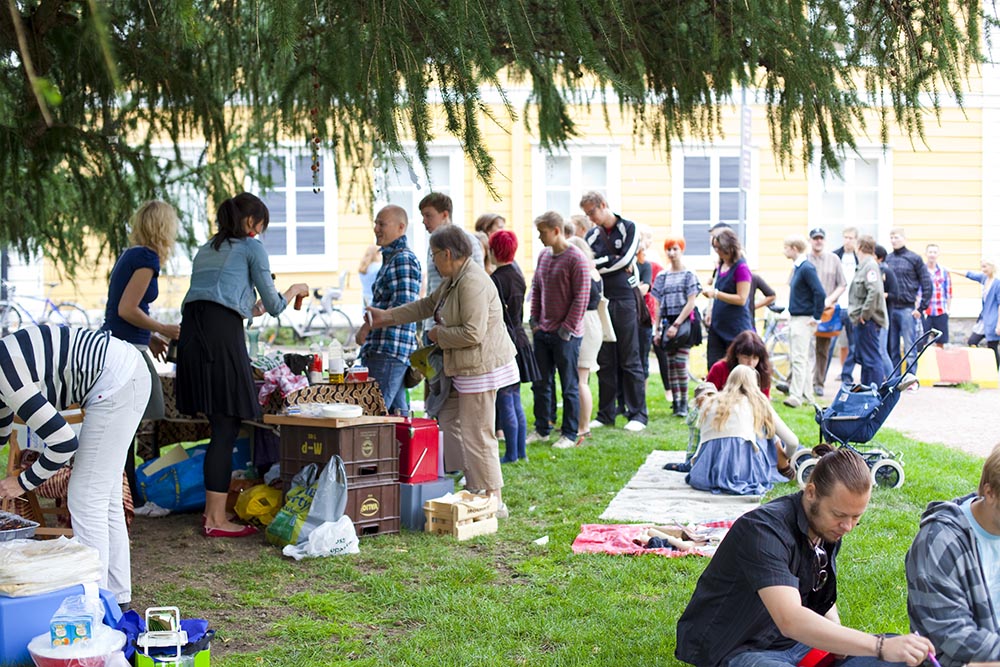 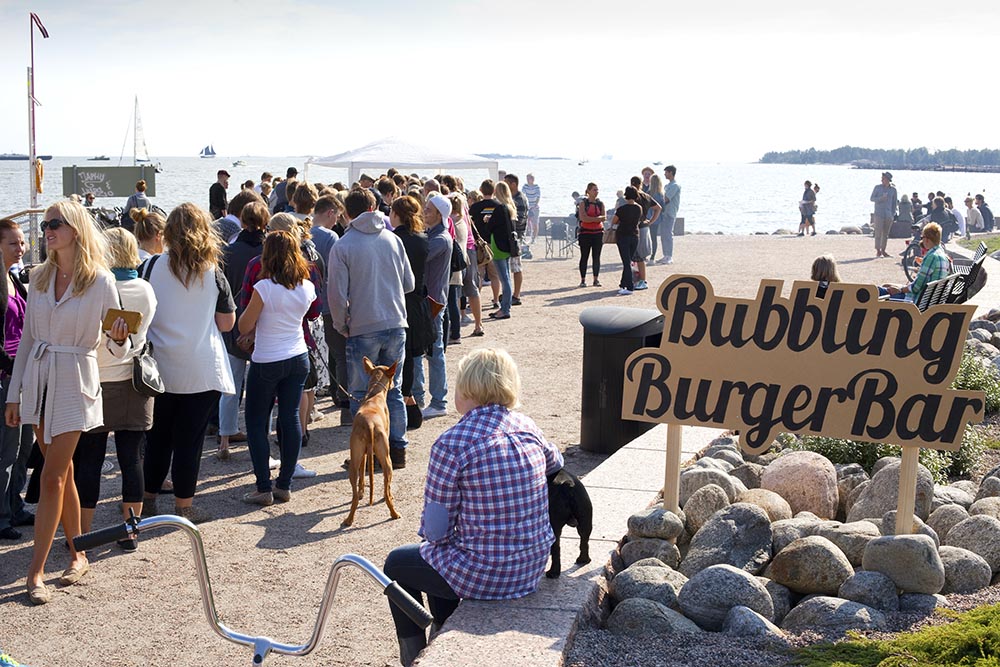 Restaurant Day – Did you know that there is a day, when anyone can set up a restaurant of their choice, anywhere they want ? Roadside, park, station, outside the house… just anywhere. Just like any car owner in Kazakhstan can make it a taxi at any time. And did you know that Helsinki has one of the most vibrant food scenes in Europe? 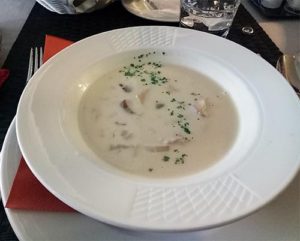 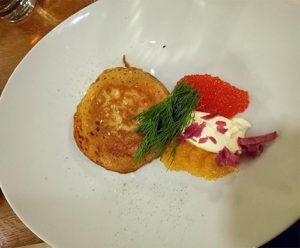 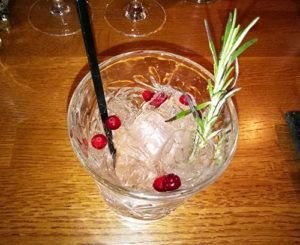 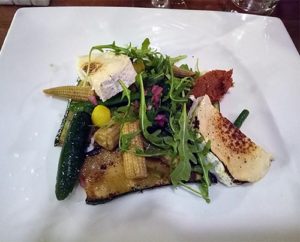 Vegetarian food – You would be surprised, as I was, to know that there is no dearth of vegetarian food in Finland. Three of us were vegetarians in our group and we had variety and plateful of veggie delights in every meal. Also, there are plenty of Indian restaurants which will satiate your taste buds.

Coffee anytime. The Finns love coffee more than anyone else in the world. When it comes to java, the Finns do it best … and the most. The average Finn consumes four to five cups of coffee every day and are the most prolific coffee drinkers in the world. In short, you will find cafes at every corner. Small or big, they serve excellent coffee and most of them have Wi-Fi as well.

Milk anyone? – When it comes to coffee, how can milk be far behind? Finland has world’s highest per capita consumption of milk! On an average, each person consumes 1 quart every day. Umm I guess that’s why I found Finns to be fair and strong. 😉 However, the weird fact here is, 17% of Finns are also lactose intolerant. 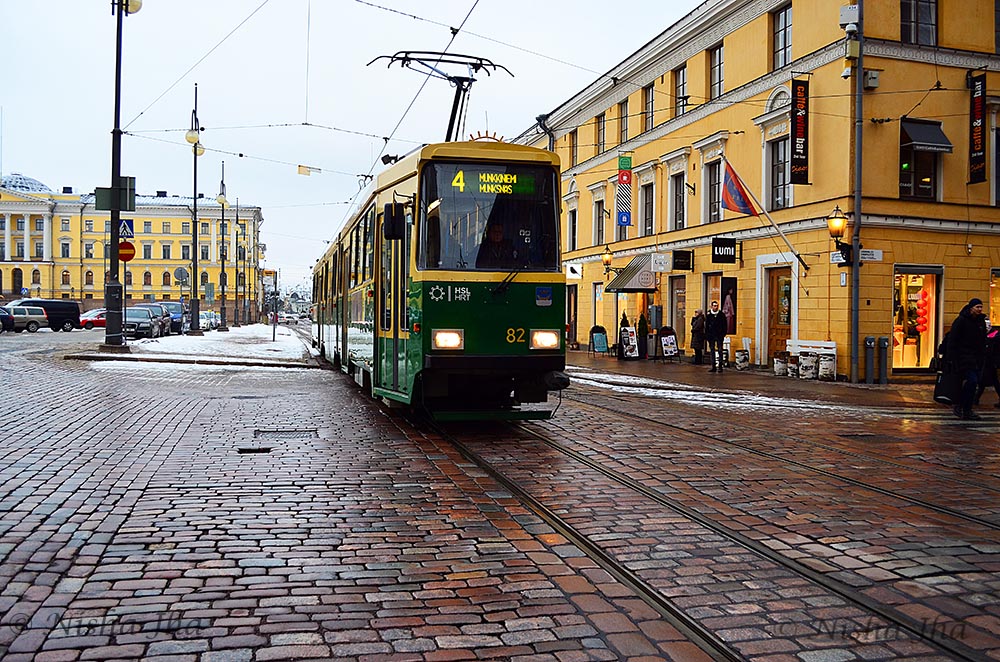 You can enjoy Trams in Helsinki just like I did.

Transport System. In Finland, traveling from one place to another is a breeze. Wherever you go, you’ll find roads are excellent. From south to north, nowhere did I find a bad patch or a pot hole. There are train connections between all major cities. However, trams run only in Helsinki city. Yes, I had a taste of it as well. 🙂

Speed at your own risk – While we are discussing about the transport system, let’s also talk about the traffic fines. Are you fast, furious and super rich? Then you better not get caught zooming through Finland. In Finland, the amount you get fined for speeding, depends on the amount you earn! Isn’t it strange? 🙂
Here the traffic fines are based on two factors. The severity of the offense and the driver’s income. The most expensive speeding ticket ever given was in 2003 for a whopping 170,000 Euros for over speeding. Having said that, I noticed everywhere that the Finns obey the rules… even in remote place where nobody is watching them. 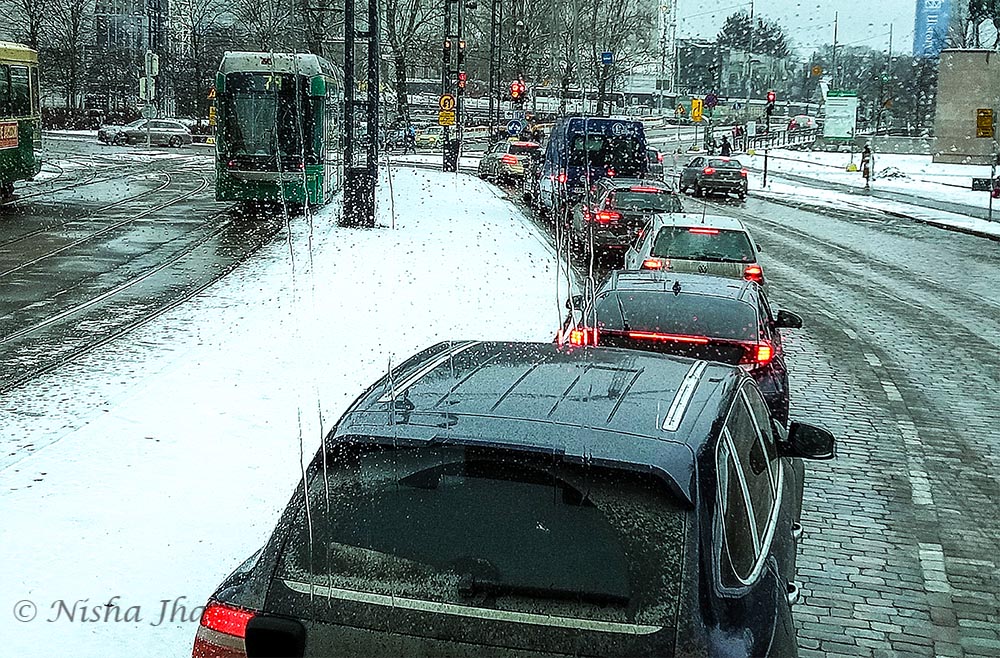 Headlights on please – While we are still on the topic of driving rules, another interesting legal requirement is to have your headlights on, whether you are driving in summer or winter, in sunlight or darkness, or even under the midnight sun!

There exists a Santa Claus village – Even if you are not a child, I am sure you would want to meet Santa Claus. You can meet Santa Claus and cross the magical Arctic Circle every day at the Santa Claus Village in Lapland in Finland. But beware, there are hundreds of versions of Santa Claus in Finland.
When Santa Claus declared Rovaniemi as his hometown, the privacy of his secret location had to be maintained. The Elf folk decided to build a place where Santa could meet people from near and far at the Northern Arctic Circle. Children can meet the great man at his rustic cottage, and bake cookies with Mrs Claus.

I could not meet him at his village but yes, saw his office in Lapland. 🙂 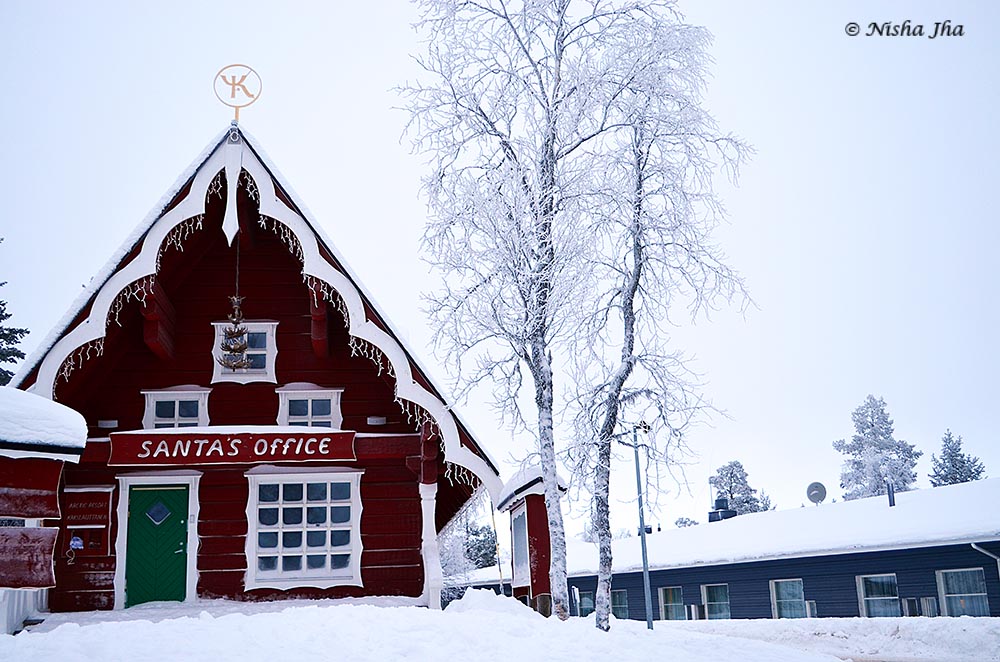 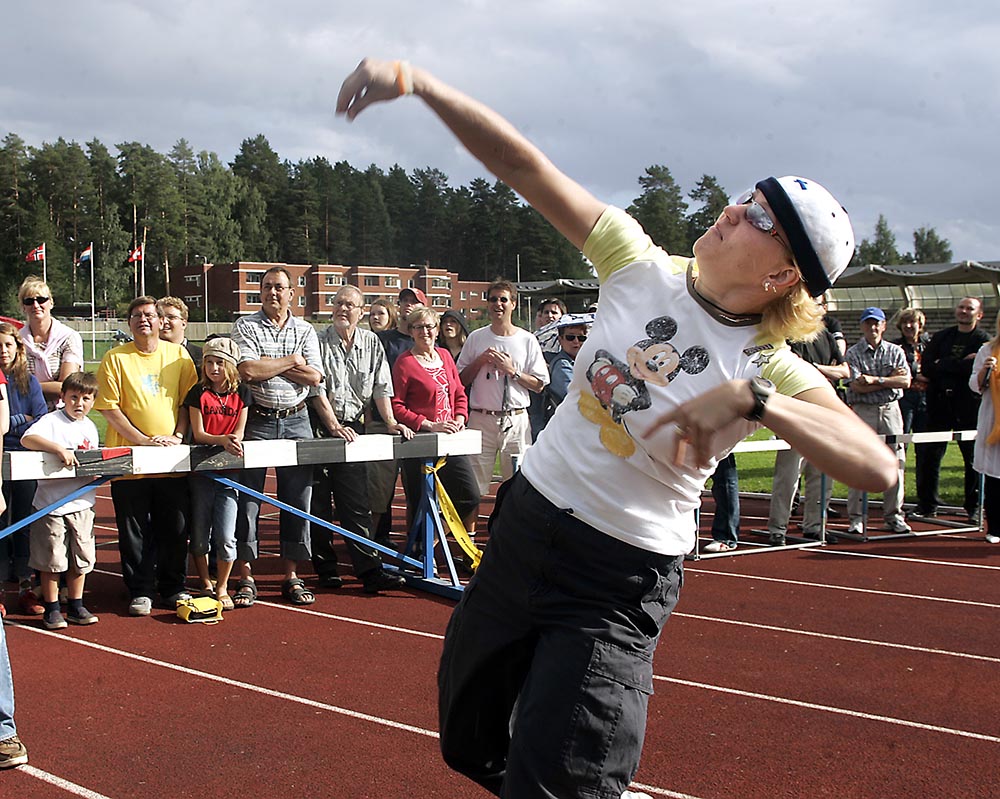 Mobile ? Let me see how far I can throw!

Come on! You’ll get beer equivalent to your wife’s weight!!

Home to Western Europe’s second biggest lake – Talking of lakes, Finland is affectionately referred to as the Land of a Thousand Lakes, but this number doesn’t even come close. There are a whopping 187,888 lakes within the territory of Finland … the most of any country in the world. At 1,700 square miles in surface area, Lake Saimaa is the largest lake in Finland.

Finland is also called as the land of midnight sun, because in summer the sun shines all day and all night in the north, not dropping below the horizon. 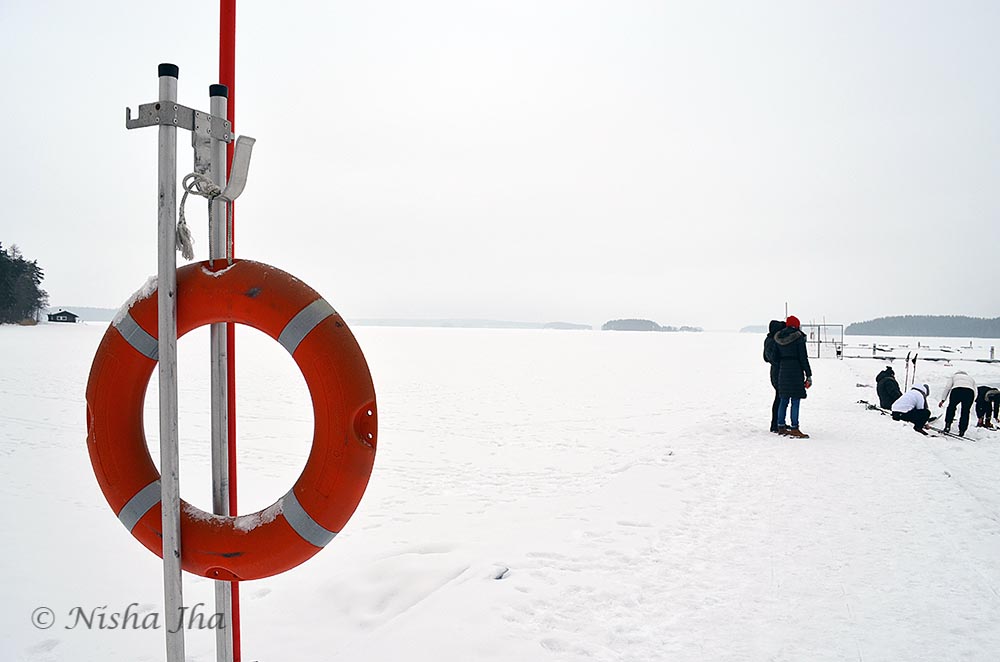 People are preparing for winter sports on the frozen lake Saimaa.

Freedom to Roam. Like other Nordic countries, Finland has some of the world’s best ‘Freedom to Roam’ opportunities. This means you can pitch a tent, sleep, swim, sail, fish or forage anywhere you like for free and without worry.

Faith and freedom – The religious freedoms have become a part of life in Finland. In Finnish law every person is allowed the right to any (or none) religion that they see fit, and are given religious instruction in accordance to their own beliefs. It is estimated that only fifty percent of Finns attend church services once a year. In fact, most of the churches are only full during the Christmas season. 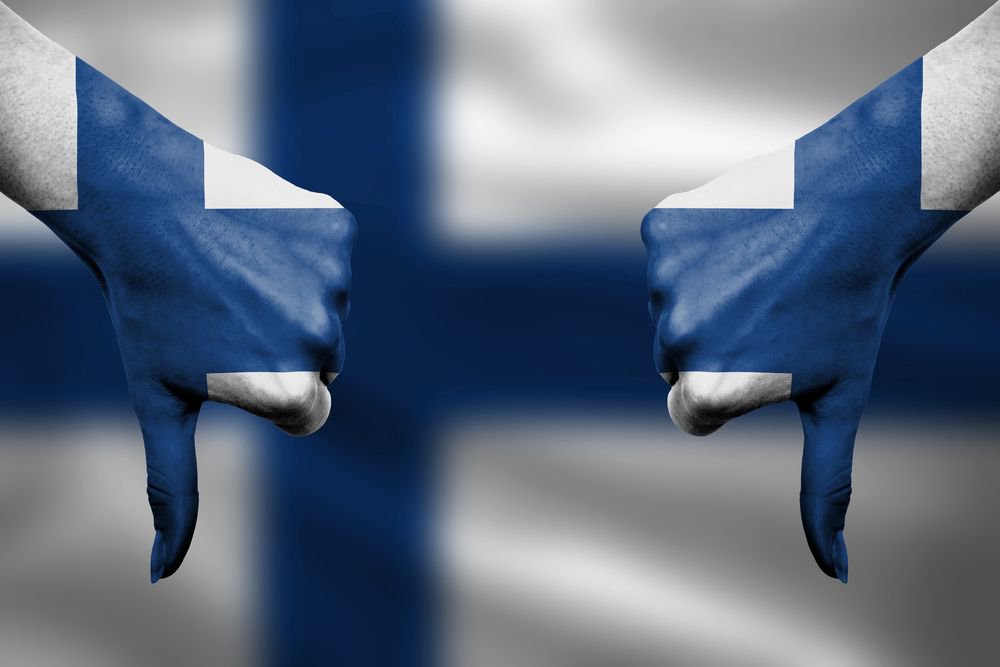 Feel like a failure? Further cementing the nation’s wonderfully off-beat sense of humor, Finland celebrates an annual Day for Failure. On October 13th, the ceremony rejoices bad news and ill-fortune as a way of learning for the future. Better luck next time, losers!

Baby in a cardboard box!! Did you know many Finnish newborns sleep in cardboard boxes? The Finnish state provides all expectant mothers with a beautiful, durable box with clothes, sheets, nappies, toys and a mattress … to be used as an excellent bed for the tiny newcomer. Some say it helped Finland achieve one of the world’s lowest infant mortality rates.
All mothers get to stay at home with their babies for almost a year with full salary or excellent benefits. In most cities when a parent with a child in a pram uses public transport, they travel free of charge. 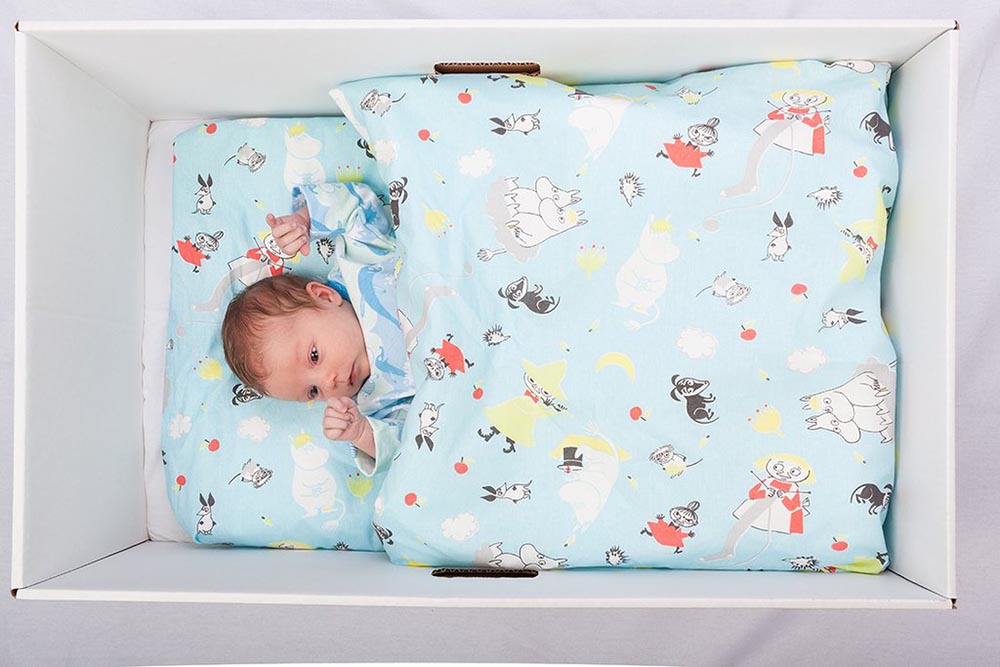 So tell me, how many of them you knew already ? 😀

Below are some other articles on Finland for you.

1. My trip to Finland was made possible by Club Mahindra and Holiday Club Resorts.
2. Images used here are either shot by me or have been provided by Visit Finland with due permissions.

Oh Siberia! Surrounded by so…

Things you didn’t know about Macau

Things you didn’t know about Mauritius